Mason Mount and Jorginho will return, while Romelu Lukaku will be in contention to feature when Chelsea and Aston Villa face off at Villa Park on Sunday.

Chelsea will hope to build on their win over Brentford in the Carabao Cup quarter-final earlier this week when they lock horns with Aston Villa at Villa Park on Sunday evening. And Thomas Tuchel has seen his woes on the team news front ease up, heading into his side’s latest fixture.

While confusion continues to reign supreme when it comes to the situation surrounding the availability of players, the Chelsea boss has seen several players resume training this week. Among those, Romelu Lukaku and Callum Hudson-Odoi have been pictured training, and the duo could be available to take on Aston Villa.

However, Ben Chilwell remains on the sidelines with his knee injury, while Hakim Ziyech and Andreas Christensen could miss out due to their niggling fitness woes. Tuchel spoke about Ziyech and Christensen’s issues in his pre-match press conference. At the same time, the Chelsea boss spoke about his frustrations about the relentless schedule.

“With Hakim, I’m not sure right now about his status. He got a kick that was very painful and I don’t know whether he will be fit for Aston Villa yet. We will need to see because there has not been a lot of time between games. Andreas had an injection in the lower back area recently and is also in a lot of pain.”

“It’s not good when we have issues like this over the past few days all at the same time when we want to be competitive but we will try and stay positive and look to arrive at Aston Villa with a full respect for the competition. Of course we are concerned because we are not only footballer players and coaches but we are also fathers and family members.”

“So there are some doubts, fears and concerns at such an uncertain situation. Still we know we are so privileged to be able to do our job and do what we love so much and I have been so impressed by the way the squad have taken things on. We live with it and we will try to be as supportive as possible.”

Wholesale changes are expected after Tuchel named a largely second-string side against Brentford in Wednesday’s Carabao Cup quarter-final tie. The shuffles should start in goal, with Edouard Mendy replacing Kepa Arrizabalaga.

In front of Mendy, Thiago Silva and Antonio Rudiger should return, with Trevoh Chalobah being their partner in the central defensive unit. Such a decision means Cesar Azpilicueta will likely miss out and return to the bench, with Reece James expected to start as the right wing-back. On the left flank, Marcos Alonso is a certainty in the absence of Chilwell. 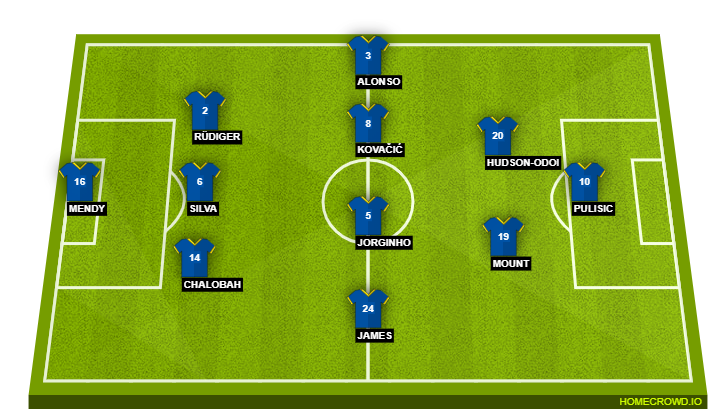 James and Alonso will likely flank Jorginho and Mateo Kovacic in the second line of the Chelsea press, with N’Golo Kante being an option on the bench. Finally, Mason Mount will be the key man for the Blues against Aston Villa in attack. The Englishman should be accompanied by Christian Pulisic and Hudson-Odoi, with Lukaku being a backup option.