Diogo Jota will return, while Roberto Firmino is in contention to feature when Liverpool and Newcastle United face off at Anfield on Thursday.

Liverpool will hope to keep pace with Manchester City at the top of the Premier League when they play hosts to Newcastle United at Anfield on Thursday night. And Jurgen Klopp does not have any new fitness issues to deal with ahead of his side’s latest fixture.

Adrian (calf), Nathaniel Phillips (head), Harvey Elliott (ankle), Curtis Jones (eye) and Divock Origi (knee) remain on the sidelines. However, there is some good news, as Roberto Firmino is fit and available after taking part in full training this week. In addition, Jones has also trained in some capacity and inching closer to his return.

In his pre-match press conference, Klopp provided an update on Firmino and Jones. The Liverpool boss said, “Bobby trained completely normal yesterday, so I would say he’s in contention. And Curtis had the first session like partial with the team, so he’s not far off. Timing-wise, [it] couldn’t be better, to be honest. How we all know, busy period, we need a full squad and getting two players of this calibre is obviously good news.”

Firmino could make an appearance off the bench, but Klopp is unlikely to hand him a place in the starting lineup, considering games are coming thick and fast this festive season. Instead, Diogo Jota will spearhead the Liverpool attack, with Mohamed Salah and Sadio Mane being the two wide men against Newcastle.

One change could be on the cards in midfield, with Klopp likely to recall Naby Keita, who has regained full fitness. Keita should replace Thiago Alcantara in the middle of the park, with Fabinho and captain Jordan Henderson being his midfield partners.

As for the defensive unit, Virgil van Dijk is in line to make his 150th appearance for Liverpool on Thursday. However, the Dutchman will have a new partner at the heart of the Reds’ defence, with Ibrahima Konate expected to replace Joel Matip. 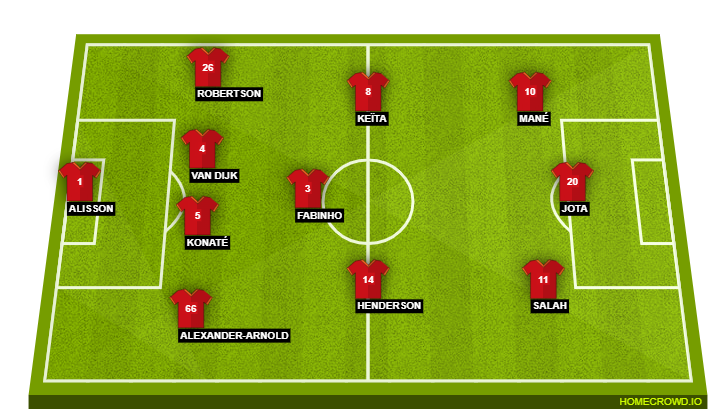 Out wide, Trent Alexander-Arnold and Andrew Robertson will be the two full-backs, although Kostas Tsimikas could get a start to hand Robertson a rest. Finally, in goal, there is no looking past Alisson Becker. Thiago, Alex Oxlade-Chamberlain and Takumi Minamino will be among the backup options on the bench.