Cristiano Ronaldo and Jadon Sancho will return, while Edinson Cavani is in contention to feature when Manchester United and Norwich City face off on Saturday.

Manchester United will aim to continue their unbeaten start to life under the tutelage of Ralf Rangnick when they lock horns with Norwich City at Carrow Road on Saturday evening. And the interim manager has some new roster issues to deal with ahead of his side’s latest fixture.

Paul Pogba (hamstring), Anthony Martial (knee) and Raphael Varane continue to be sidelined for Manchester United due to the respective injuries, although Varane has recently resumed training. In addition, Rangnick has concerns over the availability of Nemanja Matic and Aaron Wan-Bissaka.

While Matic has taken ill, Wan-Bissaka is recovering from a knock he sustained in the midweek UEFA Champions League game against BSC Young Boys after smashing into the advertising board late in the proceedings. And in his pre-match press conference, Rangnick provided an update on the duo.

The Manchester United interim boss said, “We have two or three question marks behind players since they haven’t shown up, we train at two o’clock. We have to wait until after the training session and the doctor and medical department can tell me what the situation is like. Aaron, as you said, and Nemanja Matic has a bit of a cold. I wouldn’t call it ‘flu, he is negative, tested for COVID, and I am still hoping he is available.”

However, there is some good news, as Edinson Cavani is in contention to take on Norwich City. In an interview with the Manchester United media, Rangnick provided an update on Cavani, saying, “Tomorrow’s game, the only possible candidate might be Edi. We have to wait and see.”

Cavani’s availability is a major positive for Manchester United, although he is not expected to feature from the get-go against Norwich. Instead, Cristiano Ronaldo will lead the line for the Red Devils, with Bruno Fernandes playing off him. Out wide, Jadon Sancho and Mason Greenwood will likely get the nod, with Marcus Rashford being an option on the bench. 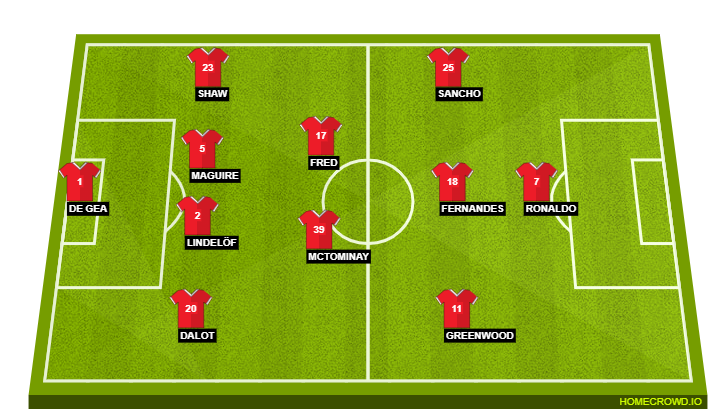 Behind the attacking quartet, Scott McTominay and Fred will form the double-pivot in midfield, with the backline set to see further changes from the game against Young Boys. Harry Maguire and Victor Lindelof will pair up at the heart of the Manchester United defence, with Luke Shaw and Diogo Dalot being the two full-backs. Finally, in goal, there is no looking past David de Gea.