You are here: Home » news » Predicted Liverpool lineup against Wolves: Konate in for Matip; Firmino still out
Football News 24/7

Ibrahima Konate will replace Joel Matip when Liverpool and Wolverhampton Wanderers face off at the Molineux on Saturday.

Liverpool will be aiming to continue their brilliant form when they lock horns with Wolverhampton Wanderers at the Molineux on Saturday afternoon. And Jurgen Klopp does not have any fresh injury concerns to deal with ahead of his side’s latest fixture.

There is some good news, though, as Joe Gomez (calf) and Naby Keita (hamstring) have resumed training this week, although the game against Wolves has come too soon for them. However, Curtis Jones (eye), Harvey Elliott (ankle) and Roberto Firmino (hamstring) remain on the sidelines for Liverpool.

During his pre-match press conference, Klopp spoke about the fixture pile-up in December while also providing an update on Gomez and Keita. The Liverpool boss said, “Players’ welfare is of course very important but we are used to a tough schedule, the boys are used to a tough schedule obviously. I don’t think we have to make now plenty of changes between the games now, at least not at the start of December.”

“We have to see how it will be in the middle or the end of December. We will see. It’s a constant conversation with the medical department, the fitness department. We have pretty much all data we can have and use them. Looking at that, then making a line-up which gives you a big chance to win the next football game. This week it’s the same. We changed quite a lot in the last few weeks.”

“[They were involved in] big parts [of the session]. It was really nice to see. We didn’t let them do the full session because medical told us not to do that, but they looked brilliant. They now use the next two or three days to do the stuff they have to while being part of team training – and then I think from Sunday on, if nothing happens between now and then, they should be in contention again.”

With Firmino still unavailable, Diogo Jota will continue to lead the line for Liverpool against Wolves, with Mohamed Salah and Sadio Mane playing alongside him. Any rotation in the attacking unit is likely to be overseen in the UEFA Champions League tie against AC Milan next week, with the Reds already confirmed as winners of their group.

There is a feeling that James Milner could get a look-in in the midfield trio. However, Thiago Alcantara, Fabinho and Jordan Henderson are expected to retain their spots in the starting lineup, leaving Milner and Alex Oxlade-Chamberlain as backup options. 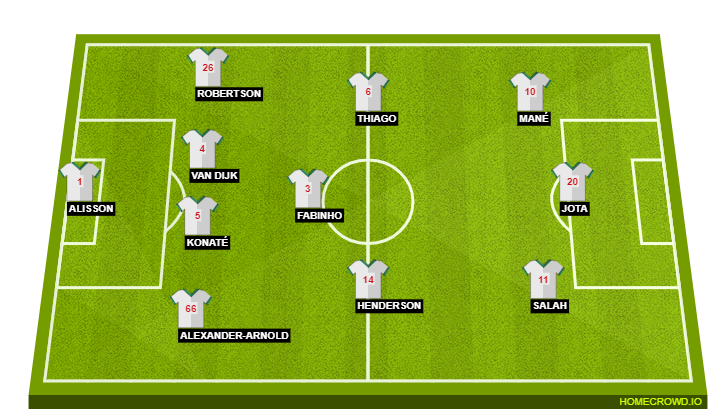