Cesar Azpilicueta and Romelu Lukaku are set to return, but Reece James might miss out when Chelsea take on Watford on Wednesday.

Chelsea will be hoping to consolidate their place atop the Premier League table when they lock horns with Watford at Vicarage Road on Wednesday night. And Thomas Tuchel is sweating over the fitness of a few key players ahead of his side’s latest fixture.

Reece James, Jorginho and Timo Werner will undergo late fitness tests to determine their availability to face Watford. However, Ben Chilwell (knee), Mateo Kovacic (hamstring) and N’Golo Kante (knee) are all certain to miss out when Chelsea make the short trip to Vicarage Road.

During his pre-match press conference, Tuchel provided an update on his injury concerns while also speaking about Romelu Lukaku and his progress upon returning from an ankle injury. The Chelsea boss said, “Romelu is pretty easy. He came on in the last match and he has continued to train with the group. He is ready to progress in minutes and this is where he is at right now.”

“For the game tomorrow at Watford, for sure we will be without Chilly, Kova and N’Golo who are all out and then we have some doubts over some other players that we need a bit more time on, to do some examinations on before deciding whether they can be involved. Reece James, Jorginho and Timo Werner we will have to wait and then decide on. They all finished training with us today but there will be some last-minute decisions on those players for sure.”

With games set to come thick and fast in December, Tuchel will need to rotate his troops efficiently, starting with the match against Watford. That should be the case on Wednesday, with James likely to be rested even if he is passed fit. In his stead, Cesar Azpilicueta should start as the right wing-back.

Up ahead in midfield, Jorginho should take his usual place in the double pivot, having trained in the build-up to the game. The Italian international should line up alongside Ruben Loftus-Cheek again, leaving Ross Barkley and Saul Niguez as backup midfield options. 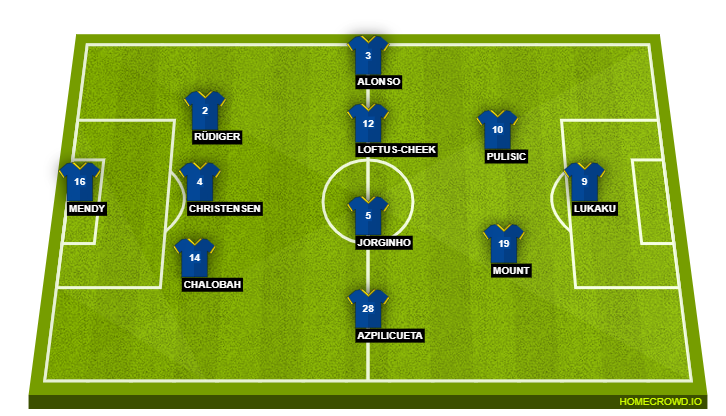 Finally, the attacking unit should feature Romelu Lukaku, who will lead the line for Chelsea against Watford, with Christian Pulisic and Mason Mount playing off him. Callum Hudson-Odoi will, thus, get a breather after playing game in game out for over a month. Hakim Ziyech, Kai Havertz and Werner will be options Tuchel will fall back upon later in the proceedings if required.