Manchester United will hope to end their miserable run of form when they lock horns with Villarreal at El Madrigal in a UEFA Champions League Group F tie on Tuesday night. And caretaker manager Michael Carrick has a fresh fitness concern to deal with ahead of the Red Devils’ latest fixture.

Luke Shaw sustained a concussion in the game against Watford this past weekend. Therefore, the Englishman could miss out against Villarreal, with Alex Telles likely to get the nod in the left-back slot on Tuesday.

Apart from Shaw, Raphael Varane (hamstring), Paul Pogba (thigh), and Mason Greenwood (illness) are certain to miss, while Edinson Cavani is a major doubt to feature against Villarreal. Carrick did not provide a team news update in his pre-match press conference but did respond to questions on whether there will be any tactical changes from Ole Gunnar Solskjaer’s time at the club.

The Manchester United caretaker boss said, “We’ll have to wait and see. I’ve worked closely with Ole for a long time now and we have very similar beliefs like we did as players and obviously as manager.”

“Yes, of course, I’ve got my own personality to Ole but of course it’s going to be similar because that’s why we’ve worked together for so long. We’ll have to wait and see, I’m not going to give much away, my plans are clear in my head how we want to play and how we will go about it. I’m looking forward to seeing it on the pitch.”

It is unclear what formation Carrick will prefer on Tuesday, but we reckon he will go ahead with the 4-2-3-1 setup prevalent under Solskjaer with slight tweaks to the playing style. In goal, David de Gea picks himself, and in front of him, Eric Bailly could come in for Victor Lindelof at the heart of the Manchester United defence.

Bailly should be getting this start preparing for the impending outing against Chelsea due to Harry Maguire’s suspension following his dismissal against Watford on the weekend. However, Maguire will start alongside Bailly in the central defensive partnership versus Villarreal. Aaron Wan-Bissaka is a certainty in the right-back spot, with Telles completing the backline.

Up ahead in midfield, Donny van de Beek is in line to get a rare start following an impressive showing off the bench against Watford. Fred will likely be recalled, with the Brazilian starting alongside van de Beek in the double pivot in the middle of the park. 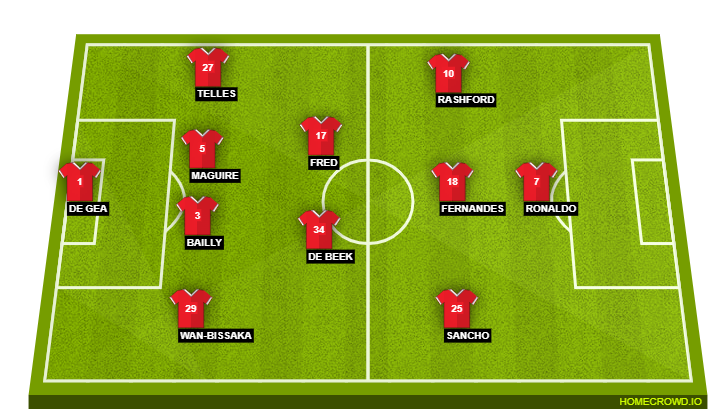 As for the attacking unit, there is unlikely to be a change, with Bruno Fernandes reprising his usual no. 10 role, playing off of Cristiano Ronaldo. Out wide, Jadon Sancho and Marcus Rashford should retain their positions ahead of Anthony Martial and Jesse Lingard.