Adrian is set to replace Alisson Becker while Tyler Morton will make his full debut when Liverpool take on Preston North End in the Carabao Cup fourth round.

Liverpool will be aiming to book their place in the Carabao Cup quarter-finals when they lock horns with Preston North End at Deepdale in the fourth round tie on Wednesday evening. And Jurgen Klopp has a few fresh injury concerns to deal with ahead of his side’s latest fixture.

While Harvey Elliott (ankle) and Thiago Alcantara (calf) remain sidelined, James Milner will be unavailable till the end of the next international break due to a hamstring injury. Naby Keita misses out as well after sustaining a knock from the heavy challenge by Paul Pogba this past weekend.

Finally, the misery in midfield is completed by the absence of Fabinho, who is recovering from a minor knee injury, while Caoimhin Kelleher is facing a race against time to overcome a minor issue in time for the game. Pepijn Lijnders took charge of the pre-match press conference as is customary for a Carabao Cup fixture, and he spoke about possible rotations against Preston on Wednesday.

“The second thing is using the squad because we know that we need in our game freshness and we need unpredictability, we need creativity. We know that fatigue stops that. If you want a team who shows hunger, who shows the will to put their game into place, to be dominant and control the game in that way, then it’s important to use the squad.”

The rotations will start right from goal, where Alisson Becker is set to be rested. However, Kelleher is unlikely to be available, meaning Adrian is set for a rare start between the sticks. Lijnders did address the issue during his presser.

The Liverpool assistant manager added, “He has his experience, he knows exactly his role. He is the type of guy who proved every time that we needed him to be there with his experience, with his leadership, with his presence with us for this long time. He will be ready if we need him.”

In front of Adrian, Liverpool will line up in their usual 4-3-3 formation, with the backline set to have an entirely new look. Joe Gomez and Nathaniel Phillips ought to form the central defensive partnership, with Kostas Tsimikas and Neco Williams expected to be the two full-backs. 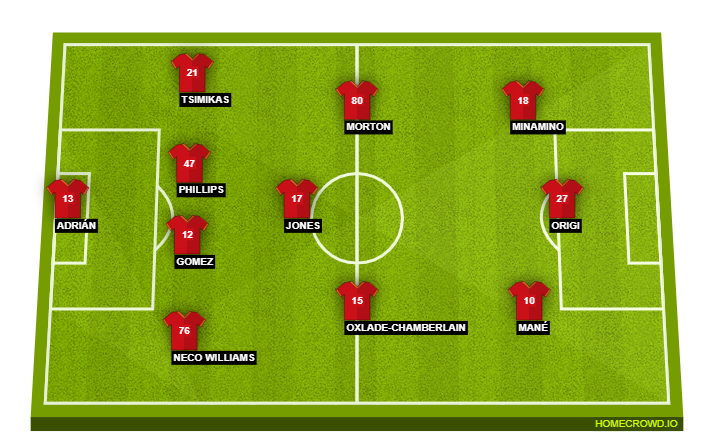 Up ahead in midfield, Klopp’s options are restricted, especially with Jordan Henderson due a rest. That means Tyler Morton could be set to make his full debut for Liverpool, with Curtis Jones and Alex Oxlade-Chamberlain being his partners in the middle of the park. Finally, the attacking unit should feature Sadio Mane, Takumi Minamino and Divock Origi, seeing as Kaide Gordon might not be fit enough to be involved.