Karim Benzema is fit and ready to start while Eden Hazard will make his El Clasico debut when Real Madrid take on Barcelona on Sunday.

Real Madrid will hope to get back to winning ways in La Liga when they travel to Camp Nou to take on bitter rivals Barcelona on Sunday afternoon. And Carlo Ancelotti has been handed a boot on the team news front ahead of his side’s latest fixture.

The Real Madrid manager had been sweating over the fitness of star striker and talisman Karim Benzema after he sustained a knock in the midweek UEFA Champions League fixture against Shakhtar Donetsk. However, the French international has been declared fit and should be ready to take on Barcelona.

In addition, Dani Carvajal and Eden Hazard have also regained enough fitness to be a part of the travelling squad this weekend. The duo could be options off the bench, but are unlikely to be fit or sharp enough to make the starting lineup.

During his pre-match press conference, Ancelotti provided an update on Carvajal and Hazard, saying, “I have everything very clear in my mind. It doesn’t seem right to discuss who will play tomorrow because I haven’t spoken to the players yet. The team is ready and we’re going to have Carvajal and Hazard back.”

“We have a great squad, everyone is focused and motivated, even if they don’t play from the start, because they understand how important it is to come on and do a good job. Hazard is fine. He has trained with the team, everything’s okay, just like Carvajal. Then, we know it’s difficult to throw a player coming back from injury straight into the action. The key thing is to have him available and he could be useful at any point.”

With Hazard not expected to start, Ancelotti is likely to persist with the attacking trio of Benzema, Vinicius Jr. and Rodrygo Goes, although there have been suggestions that Federico Valverde could be deployed as a wide attacker who will then add another body in midfield. 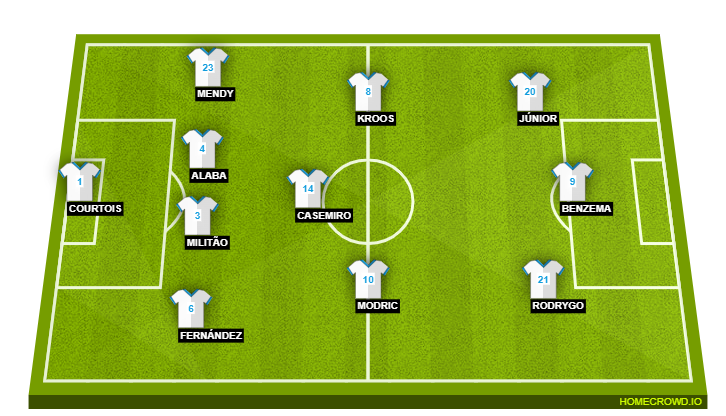 Valverde, though, might only be an option off the bench, with the traditional midfield trio of Luka Modric, Toni Kroos and Casemiro set to be persisted with against Barcelona. At the heart of the Real Madrid defence, Eder Militao ought to pair up with David Alaba again, but Nacho should come in for Lucas Vazquez at right-back while Ferland Mendy will start on the left flank again. Finally, in goal, Thibaut Courtois picks himself.