Timo Werner, Ben Chilwell and Mason Mount will return to the starting lineup when Chelsea welcome Southampton to Stamford Bridge on Saturday.

Chelsea will look to end their two-game losing run and return to winning ways when they play hosts to Southampton at Stamford Bridge on Saturday afternoon. And Thomas Tuchel has been handed a major boost on the team news front ahead of his side’s latest fixture.

The good news comes in the form of Mason Mount’s return to fitness after missing the last couple of games due to a knock. So, with the English international now back in full training, Tuchel has just three players remaining on the sidelines in Reece James (ankle), N’Golo Kante (COVID-19) and Christian Pulisic (ankle).

During his pre-match press conference, the Chelsea boss provided an update on Mount and James, saying, “Mason is in the squad, Mason is back. It was not a long injury, and we are happy he is back. It’s obviously a given he is nominated in the England squad and he will give everything.”

“When I saw it [James’s inclusion in the England squad], I thought maybe Reece was in the England water polo team! Reece is training in the pool right now. I understood he was selected for the football team. This will not happen. My understanding is he will not go. It can only be a misunderstanding, nothing else.”

Tuchel was also quizzed about the situation of Kante, who is in self-isolation. The Chelsea boss said, “N’Golo has symptoms but not a lot of symptoms, so he’s okay. I don’t want to go into more details. He’s okay. He’s doing well. We’re in touch with him every single day. The doctors are in touch with him and he has our advice and our support, and he is in a good way.”

Mount’s availability means he should be back in the starting lineup, playing off of Romelu Lukaku. The third man in the attacking unit will likely be Timo Werner, who was an unused substitute in the game against Juventus earlier this week, meaning Kai Havertz and Hakim Ziyech drop down to the bench.

As for midfield, Mateo Kovacic has been playing non-stop for quite some time and could be due a rest. In his stead, Ruben Loftus-Cheek could be handed his first start in the Premier League this season, with the Englishman sitting alongside Jorginho in the double pivot. 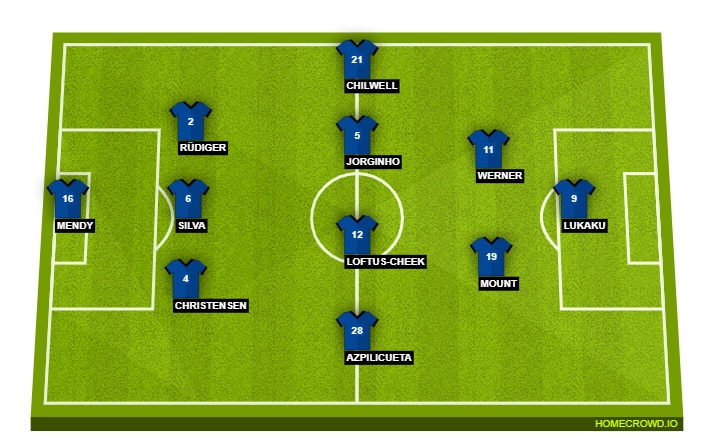 Cesar Azpilicueta will continue to fill in for James in the right wing-back slot while on the opposite flank, Ben Chilwell could be recalled following an underwhelming display by Alonso at Juventus. In Azpilicueta’s absence in the three-man central defensive unit, Andreas Christensen, Thiago Silva and Antonio Rudiger pick themselves as the three centre-backs while Edouard Mendy is a certainty in goal.