Mohamed Salah and Virgil van Dijk will return while Naby Keita will miss out with an injury when Liverpool face Brentford on Saturday.

Liverpool will be aiming to continue their unbeaten start to the 2021/22 season when they take on Brentford at the Brentford Community Stadium on Saturday evening. And Jurgen Klopp has given a mixed bag of updates on the team news front ahead of his side’s latest fixture.

The good news for the Liverpool boss comes in the form of Trent Alexander-Arnold and James Milner, both of whom have recovered from their respective illnesses to be available to take on Brentford this weekend. In addition, Roberto Firmino is almost fully fit now after training with the entire squad for a few days now.

However, a number of key players are missing for Liverpool, with the major absentees being Thiago Alcantara and Naby Keita. Thiago continues to recover from his calf injury while Keita will miss out on Saturday after sustaining a foot injury earlier this week in the Carabao Cup clash with Norwich City.

The other absentees for the visitors are Neco Williams (match fitness) and Harvey Elliott (ankle). During his pre-match press conference, Jurgen Klopp provided an update on Firmino, suggesting that he is unlikely to start against Brentford.

The Liverpool boss said, “Bobby trained already for two or three days, so he is back in contention, let me say it like this. We used him a little bit as a ‘joker’ [in training]. But he will be in the normal training and then we have to make a decision if we take him with us or not. Porto [on Tuesday night], 100 per cent. Brentford, we have to see.”

Klopp also spoke about the issues plaguing Thiago and Keita, saying, “It’s not 100 per cent clear when Thiago will be back. It’s a muscle in the calf issue, so after the international break probably – I don’t think there’s anything earlier possible. We will have to see. [It’s] nothing really serious [with Keita], but it keeps him out of the next game for sure – and maybe a little bit longer, we have to see.”

The absence of Keita means Curtis Jones will be handed a rare Premier League start, with the young midfielder likely to be preferred over James Milner. Jones will line up alongside Fabinho and captain Jordan Henderson in the three-man midfield unit.

As for the defensive setup, Virgil van Dijk ought to return to the heart of Liverpool’s backline, with Joel Matip likely to be his partner this weekend. Out wide, there is no looking past Alexander-Arnold and Robertson while Alisson Becker is a certainty in goal. 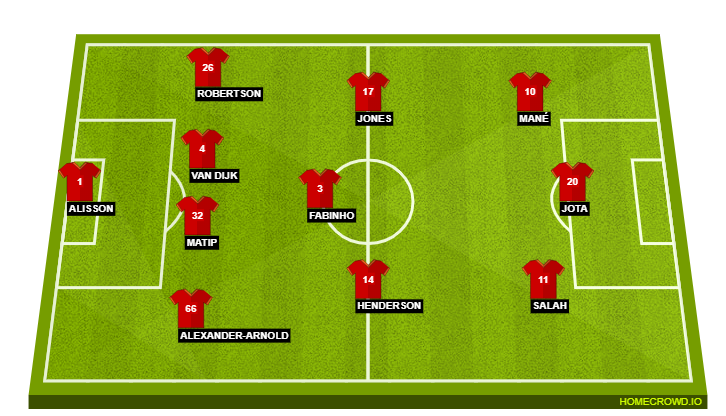 Finally, in the attacking department, the iffy nature of Firmino’s availability means Diogo Jota, Mohamed Salah and Sadio Mane pick themselves, with Divock Origi and Takumi Minamino being in contention to feature later in the game following positive performances against Norwich.