Saul Niguez and Timo Werner will return while Romelu Lukaku is set to receive some rest when Chelsea face Aston Villa in the Carabao Cup third round.

Chelsea will be aiming to reach the fourth round of the Carabao Cup when they play hosts to Aston Villa at Stamford Bridge in a third round tie on Wednesday night. And Thomas Tuchel does not have any fresh injury concerns to deal with ahead of his side’s latest fixture.

Edouard Mendy is the major absentee for Chelsea, with the Senegalese goalkeeper recovering from the injury that forced him to miss out against Tottenham Hotspur last time out. The only other player missing for the hosts is Christian Pulisic, whose ankle issue continues to keep him on the sidelines.

During his pre-match press conference, Tuchel was quizzed about Mendy and when he will be back in contention. The Chelsea boss replied, “Mendy cannot play tomorrowHe has not been in training so far so we will try to do everything for Saturday, to reintegrate him tomorrow for individual training and hopefully Thursday’s team training, but not yet.”

“I think Saturday is possible but it’s a race against pain and a race against time. So let’s see. I hope he will be back in team training on Thursday and if this goes well he can be ready for Saturday, but I don’t know right now.”

Tuchel also heaped praise on Kepa Arrizabalaga, who has been rather impressive this season. “He seems happy to me. I feel him happy. Maybe he could be happier in terms of having more minutes, but I don’t feel him concerned in the moment because he is pushing and he is fighting for his chances.”

Kepa will once again deputise for Mendy in the Chelsea goal, with the Blues set to field a rotated team, as confirmed by Tuchel himself. With that in mind, Trevoh Chalobah ought to get a chance to impress, with Andreas Christensen and Cesar Azpilicueta being his central defensive partners.

Up ahead in midfield, Saul Niguez is in line to make his first Carabao Cup appearance, with Mateo Kovacic likely to sit alongside him in the double pivot. Out wide, Reece James and Ben Chilwell ought to return after being excluded against Tottenham. 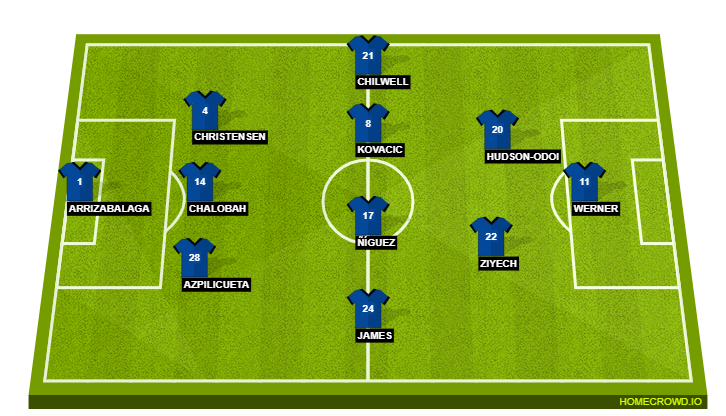 The attacking unit should have a new look as well, with Callum Hudson-Odoi starting alongside Hakim Ziyech to provide creative support to Timo Werner, who will replace Romelu Lukaku as the central striker for Chelsea against Aston Villa.