According to the print edition of Sunday Mirror, as relayed by Goodison News, Everton have tabled their latest proposal to sign Joaquin Correa before the summer transfer window slams shut. The 27-year-old Argentine international is eager to make the switch to the Premier League, with the Toffees offering £32 million to secure his services.

Joaquin Correa has come leaps and bounds since joining Lazio from Sevilla in the summer of 2018. A regular feature for the Biancocelesti over the last three years, the 27-year-old has slowly added more goals to his game, and is coming into this season on the back of a successful Copa America campaign with the Argentine national side.

To date at club level, Correa has made 117 appearances for Lazio while chipping in with 30 goals and 18 assists along the way. His progress has alerted a number of top clubs across Europe, with Everton currently leading the race to sign him.

The interest from Everton is understandable despite the acquisition of Demarai Gray and Andros Townsend this summer. Indeed, neither player really elevates the levels in the Toffees’ attacking unit all that much, which is why it is imperative that they sign another forward to the first-team setup. 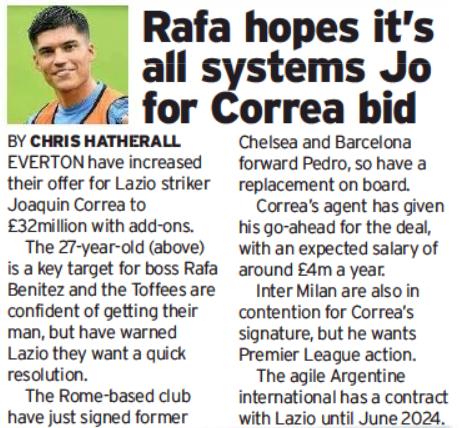 In addition, Richarlison’s uncertain future only begets the need of a new attacker all the more, with Correa a viable target for them. In recent weeks, it has been suggested that the Merseyside giants are set to make a serious proposal to sign the Argentine international, and it looks like their offer is set to be presented.

As per Sunday Mirror (h/t Goodison News), Everton have tabled an offer worth £32 million plus bonuses, and they are hopeful of securing his services. And while Inter Milan are also keen on signing the 27-year-old, the player’s own preference is to make the switch to the Premier League, making Everton the front-runners in his pursuit.

The report also adds that Correa’s agent has given the green light for him to sign a £77,000-a-week contract. What now remains to be seen is if the £32 million bid does the trick for Everton to land the Lazio forward or if they are forced to raise their offer for him.