Jordan Henderson is set to return but Fabinho will be unavailable when Liverpool welcome Burnley to Anfield on Saturday.

Liverpool will be hoping to make it two wins in a row at the start of the season when they play hosts to Burnley at Anfield on Saturday afternoon. And Jurgen Klopp will have to make do without a couple of key players heading into his side’s latest fixture.

Andrew Robertson has rejoined full training in the build-up to Burnley’s visit, but the game is likely to have come too soon for the Scottish defender, who is only likely to make his first start of the season next week. The other Liverpool player who misses out is Fabinho.

The Brazilian midfielder has been afforded a leave on compassionate ground following a family bereavement and will not be available to take on Burnley. Klopp did provide an update on Fabinho during his pre-match press conference, where he also spoke about how Jordan Henderson and Thiago Alcantara are coming along in their fitness.

The Liverpool boss said, “I would like to say it’s a private situation. Fab is here and is doing what he is able to do and that’s it pretty much. We all feel for him, we all feel with him and we give him and his family our condolences. We try to give him all the warmth, all the love we have in this moment and that’s it, the rest is private.”

“They [Henderson and Thiago] are much closer, yes. They look fine, now we have to make the decision. They looked really good in the game and looked good in the training week, so it’s up to me to make some decisions.”

Henderson ought to start at the base of the three-man Liverpool midfield, where Fabinho would have otherwise started if he was not unavailable. Alex Oxlade-Chamberlain ought to be the man making way for the Liverpool captain, meaning James Milner and Naby Keita should get another opportunity in the middle of the park.

Robertson’s continued absence means Kostas Tsimikas will be afforded another rare start, with the Greek left-back possibly playing his last Premier League game for a while. On the opposite flank, Trent Alexander-Arnold is a certainty, while Joel Matip and Virgil van Dijk should continue to pair up at the heart of the Liverpool defence. In goal, there is no looking past Alisson Becker. 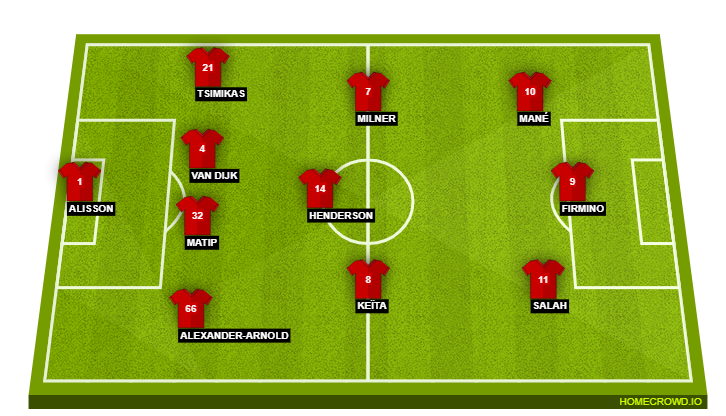 Finally, in attack, Klopp will once again have to pick out three of the four first-choice options. And on this week, Diogo Jota could be the one to miss out despite an impressive display last week versus Norwich City. In his stead, Roberto Firmino will start, with Mohamed Salah and Sadio Mane rounding off the starting lineup.