Everton have reportedly submitted an enquiry to Barcelona over the possibility of signing out-of-favour French defender Samuel Umtiti.

According to the print edition of Daily Express, as relayed by Goodison News, Samuel Umtiti is the subject of interest from Everton over a late move in the summer transfer window. The Premier League giants have, in fact, already made an enquiry to Barcelona for the out-of-favour French defender, who is surplus to requirements at Camp Nou.

Samuel Umtiti joined Barcelona from Lyon in the summer of 2016 and almost immediately made a positive impression at Camp Nou. However, after a strong first couple of seasons at the Catalan club, the 27-year-old has been on a constantly downward spiral, with a spate of injuries and their repercussions forcing him to miss more matches than he has featured in.

To date, Umtiti has made 132 appearances for Barcelona, chipping in with two goals and an assist in the process. However, with the player now a shell of the solid defender they signed half a decade ago, the Blaugrana are desperate to cut their losses on him. As fate would have it, they might be set to be bailed out by Everton, although the Toffees have only made a “cheeky” enquiry for now.

As per Daily Express (h/t Goodison News), Everton have approached Barcelona with what is merely an informal enquiry. The Premier League giants, though, do seem to be in need of signing a centre-back, despite the fact that Rafael Benitez has four options in Michael Keane, Mason Holgate, Ben Godfrey and Yerry Mina at his disposal. 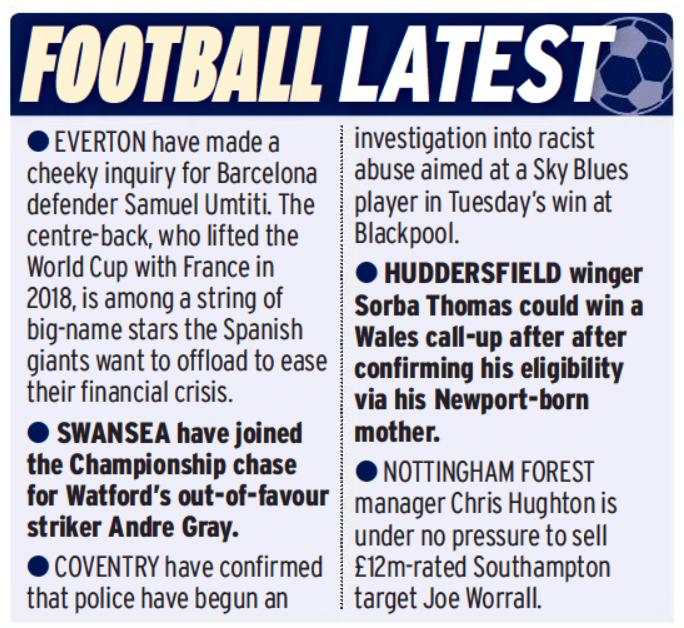 That is because Mina has not been too impressive at Everton and it has even been suggested that the former Barcelona defender could be offloaded by the Merseyside club this summer. As a result, Everton have been linked with several centre-backs in recent weeks, with Umtiti now emerging as a target.

Umtiti’s compatriot Clement Lenglet has reportedly been targeted by the Toffees as well, although that particular trail has gone cold. Barcelona, though, would hope Everton are serious about signing Umtiti instead, as they look to get him off their books.

In fact, there have even been suggestions that Barcelona would be ready to terminate his contract if they do not receive any acceptable bid for the 27-year-old. What now remains to be seen is if Everton do make an offer for Umtiti or if Barcelona are forced to take a drastic measure to offload him.