Jadon Sancho is set for his Manchester United debut while Paul Pogba  and Anthony Martial will be in the starting lineup against Leeds United on Saturday.

Manchester United will be determined to kick-start their 2021/22 campaign on a strong note when they play hosts to Leeds United at Old Trafford in Saturday’s lunch-time kick-off. And Ole Gunnar Solskjaer has plenty of key players missing ahead of his side’s season-opener.

In fact, the Manchester United manager will be missing the services of as many as eight first-team players due to injury-related issues or illness. Of these, the major absentees are Marcus Rashford and Edinson Cavani, with the former recuperating after undergoing shoulder surgery while the latter returned to Manchester late after his participation in the Copa America.

The other half a dozen players who are unavailable are namely Dean Henderson, Alex Telles, Phil Jones, Eric Bailly and Jesse Lingard, while Raphael Varane misses out as his signing is yet to be formally completed, meaning he is yet to be registered. However, there is some good news as well, with Jadon Sancho set to make his Manchester United bow.

Speaking to the Manchester United media, Solskjaer did seem to confirm that Sancho will feature off the bench against Leeds, saying, “Jadon has come in and done very good this week. Maybe a little bit too early, I’ll see how he is. I’d say you’ll see him. He’s definitely involved in the squad.”

“Edi is in the country. He’s just finishing off his isolation period. He’s had a little bit of extra time for personal reasons. Eric and Amad are also in the country waiting to get the all-clear to join the team again. They’ve had a very exciting summer of course, been in the Olympics, played games before that as well, so they should be fit before they come.”

Solskjaer also confirmed that Manchester United will be involved against Leeds, possibly as part of the starting lineup. Martial will indeed lead the line for Manchester United against Leeds, with Mason Greenwood taking his place on the right wing. On the opposite flank, Paul Pogba could edge out Daniel James while Bruno Fernandes’s position as the no. 10 is indubitable.

As for the midfield unit, Nemanja Matic looked quite sharp in pre-season and could well get the nod over Scott McTominay, partnering Fred in the double pivot. As for the defence, Varane’s absence means the back four will have a familiar look. 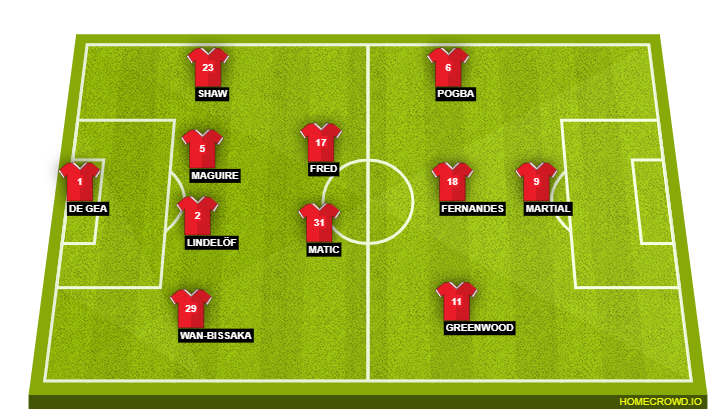 Victor Lindelof and captain Harry Maguire will pair up at the heart of the Manchester United defence while Luke Shaw and Aaron Wan-Bissaka pick themselves in the full-back slots. Finally, in goal, there is no looking past David de Gea in the absence of Henderson.