Chelsea and Liverpool are reportedly in talks with the representatives of 26-year-old Spanish international Saul Niguez over a move this summer.

According to a report by Spanish publication MARCA, as relayed by Sport Witness, Chelsea and Liverpool appear to have stepped up their efforts to sign Saul Niguez from Atletico Madrid in the summer transfer window. The Premier League heavyweights have made contact with the 26-year-old Spanish international’s agents, and a move could be in the offing.

Saul Niguez has headed into the summer transfer window on the back of one of his worst seasons at senior level to date. The 2020/21 season saw him gradually fall down the pecking order, with his predicament potentially worsening following the arrival of Rodrigo De Paul from Udinese.

To date, the 26-year-old has made 337 appearances for the reigning La Liga champions, chipping in with 43 goals and 19 assists. However, his fall in stature has also reflected on the international level, as Saul has also lost his spot in the Spanish national side. However, in the transfer market, he is still being chased by some of the biggest clubs in Europe, with Chelsea and Liverpool interested.

The interest from Chelsea is interesting, as Thomas Tuchel does have three world-class midfielders at his disposal in Jorginho, N’Golo Kante and Mateo Kovacic. However, the German tactician will still need another midfielder in his squad following Billy Gilmour’s loan move to Norwich City. With last season’s loanees not in Tuchel’s plans, it is clear that a midfielder would be needed at the club. 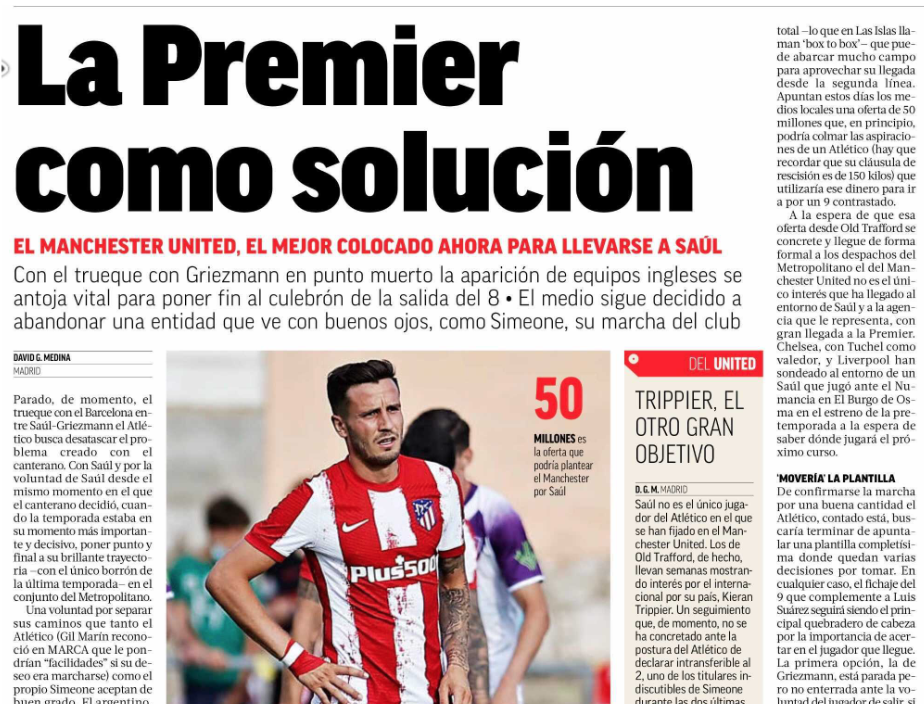 Liverpool, on the other hand, have been hot on Saul’s trails for quite some time now, having even submitted an offer to sign him recently. However, of late, there have been suggestions that Jordan Henderson could be included in the deal to sign the Spanish international, although he could arrive as a replacement for Georginio Wijnaldum.

The report by MARCA (h/t Sport Witness) has mentioned that Manchester United are the likeliest destination for the 26-year-old, although Chelsea and Liverpool are making their attempts to land him by making contact with his agents.

For now, what appears to be likely is that Saul’s time at Atletico Madrid has seemingly reached its end, with Atletico Madrid open to cashing in on him as well. What now remains to be seen is if Chelsea or Liverpool can produce a sizable enough bid to convince the Colchoneros to sell Saul to them ahead of Manchester United.