Lionel Messi has been rested, while Frenkie de Jong and Riqui Puig will return when Barcelona take on SD Eibar at the Ipurua on Saturday.

Barcelona will be eager to end a disappointing 2020/21 La Liga campaign on a strong note when they lock horns with SD Eibar at the Ipurua on Saturday evening. And, heading into the match, Ronald Koeman has a heavily altered squad at his disposal.

While Clement Lenglet is set to miss the final game of the season due to a one-match ban, accrued after being sent off against Celta Vigo last week, Marc-Andre ter Stegen is recovering from a knee injury and is undergoing a procedure to get the issue fixed.

Apart from Lenglet and ter Stegen, the likes of Sergi Roberto, Ansu Fati and Philippe Coutinho are on the sidelines as well. In addition, Lionel Messi and Pedri have been rested and omitted from the travelling Barcelona squad after practically participating in every single game this season.

During his pre-match press conference, Koeman did touch upon the subject of players who have played week in week out, albeit only briefly so. The Barcelona boss said, “There are 3-4 players who have made a tremendous effort in every way. Messi, Pedri and de Jong have played many games.”

In the absence of the injured ter Stegen, Neto is set to make a rare start for Barcelona, taking his place between the sticks against Eibar. In front of the deputy goalkeeper, the visitors will line up in a 3-5-2 formation, with Samuel Umtiti, Ronald Araujo and Gerard Pique practically picking themselves in the three-man central defensive unit. Sergino Dest and Junior Firpo are likely to be the two wing-backs.

Up ahead in midfield, Frenkie de Jong is set to be back in the starting lineup after missing out against Celta Vigo due to suspension. The Dutchman should come in for Ilaix Moriba, with Riqui Puig expected to replace the rested Pedri. Puig and de Jong ought to have Miralem Pjanic for company in the middle of the park, with the Bosnian set to a rare start in place of Sergio Busquets. 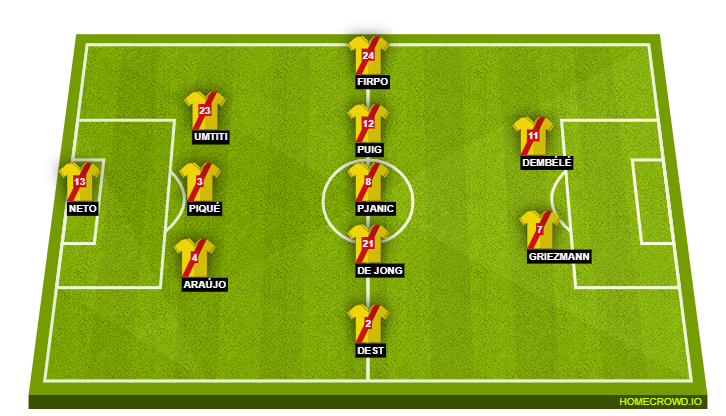 Finally, in attack, with Messi rested, Ousmane Dembele ought to move into the strike partnership for Barcelona, where Antoine Griezmann will likely be his partner against Eibar. Francisco Trincao and Martin Braithwaite will be options off the bench for the visitors.