Ole Gunnar Solskjaer is set to ring in the changes, with Amad Diallo in line for his full debut when Manchester United take on Leicester City on Tuesday.

Manchester United will be hoping to continue safely tackling an arduous fixture pile-up when they play hosts to Leicester City at Old Trafford on Tuesday evening. And, Ole Gunnar Solskjaer has one fresh injury concern to deal with ahead of his side’s latest fixture.

Captain Harry Maguire is set to miss a Premier League game for the first time since joining Manchester United from Leicester back in the summer of 2019. That is because he sustained an ankle injury that should keep him out of Tuesday’s game and beyond. Apart from Maguire, Phil Jones, Daniel James and Anthony Martial are also sidelined.

While Solskjaer did not provide an update on Maguire when speaking to the Manchester United media, he did suggest that a few youngsters could get a look-in. Solskjaer said, “They [Amad and Shoretire] are in contention, yeah, definitely and they’re in the first-team squad. They’re training with us every day so I would think that some of the young boys will get an appearance definitely.”

“If it’s coming on towards the end or starting, I don’t know because I don’t know how the players will be on Tuesday when we see them. I wish I could have said let’s go full out in all the games. But it’s impossible. That’s the hard bit for me – knowing that if I do play the same XI again on Tuesday and Thursday, it’s impossible.”

Considering the visit of Leicester comes just 48 hours after Manchester United’s own trip to Villa Park, it is almost certain that Solskjaer will choose this game to make wholesale changes. The first shuffle will come in goal, with David de Gea coming in for Dean Henderson.

One of the changes will be forced anyway, with Eric Bailly surely replacing Maguire at the heart of the Manchester United defence, with Axel Tuanzebe starting alongside him, meaning Victor Lindelof gets a breather. Luke Shaw and Aaron Wan-Bissaka ought to be rested as well, with Alex Telles and Brandon Williams starting in their stead.

Up ahead in midfield, Nemanja Matic is an automatic pick due to the outlook of making heavy rotations, with Donny van de Beek likely to be deployed in the double pivot alongside him. Fred and Scott McTominay will get a rest, and so will Bruno Fernandes, Marcus Rashford and Paul Pogba. 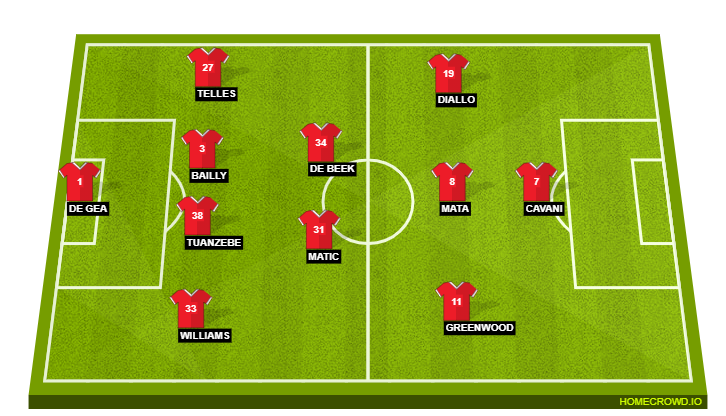 That means Mason Greenwood, who was taken off around the hour mark against Aston Villa, will be the only player keeping hold of his spot in the side. Juan Mata should get a rare start reprising the no. 10 role, with Amad Diallo getting his full debut on the left flank. Finally, Edinson Cavani, who has officially extended his stay with the Red Devils, will lead the line against Leicester.

One Response to “Predicted Manchester United lineup against Leicester City: Solskjaer to ring in the changes; Diallo set for full debut”