Ronald Koeman is unlikely to ring in a single change when Barcelona welcome Atletico Madrid to Camp Nou on Saturday.

Barcelona will be hoping to claim top spot in the La Liga standings when they play hosts to current leaders Atletico Madrid at Camp Nou on Saturday evening. And, Ronald Koeman has been handed a boost on the team news front ahead of his side’s latest fixture.

Martin Braithwaite is back at the disposal of the Barcelona manager, with the Dane being included in the matchday squad to take on Atletico Madrid. That means only two players miss out for the hosts, with Philippe Coutinho and Ansu Fati on the sidelines.

In fact, Fati recently underwent an arthroscopy on his left knee and Koeman was quizzed about the youngster during his pre-match press conference. The Barcelona boss said, “I spoke to Ansu before his trip. We encouraged him. There were some things that didn’t go well because 6 months is a long time and the most important thing is that he will recover and he will be with us next season.”

As for matters on the pitch, Koeman has a strong squad available to him ahead of the visit of Atletico Madrid despite the absence of Fati and Coutinho, and he is unlikely to make any changes to the side that got past Valencia last week. In the Barcelona goal, there is no looking past Marc-Andre ter Stegen.

The major selection dilemma will come in defence, where Koeman has to pick between Ronald Araujo and Oscar Mingueza. However, after a solid effort last time out, Araujo should get the nod to partner Gerard Pique and Clement Lenglet in the three-man central defensive unit against Atletico Madrid.

Up ahead in midfield, Sergio Busquets, Frenkie de Jong and Pedri pick themselves, with Ilaix Moriba being an option off the bench. Jordi Alba is a certainty as the left wing-back while on the right flank, Sergino Dest ought to get the nod ahead of Sergi Roberto, who has failed to impress since returning from injury. 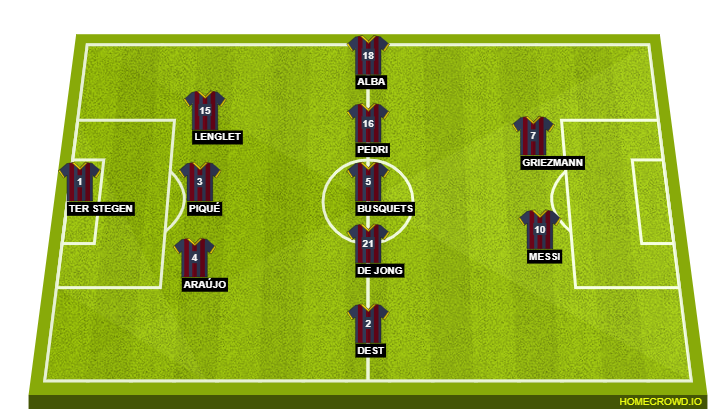 As for attack, Ousmane Dembele has become a peripheral figure lately, and Koeman was asked to comment on his lack of game-time. The Barcelona manager said, “It is clear that I am counting on Dembele, as with everyone else on the list. He can be on the pitch. Lots of things can happen during a game. We will put the best team with which we think we can win the match.”

Dembele, though, is unlikely to make the starting lineup once again, considering the form of Lionel Messi and former Atletico Madrid superstar Antoine Griezmann. Indeed, Messi and Griezmann were in fine touch last weekend and are the obvious picks in the final third ahead of Dembele, Francisco Trincao and Braithwaite.

One Response to “Predicted Barcelona lineup against Atletico Madrid: Koeman unlikely to make any changes”