Donny van de Beek and Amad Diallo are set to receive rare starts while Daniel James misses out when Manchester United take on AS Roma on Thursday.

Manchester United will be hoping to confirm safe passage through to the UEFA Europa League final when they face AS Roma at Stadio Olimpico in the semi-final second leg on Thursday night. Heading into the fixture, the Red Devils have one foot in the grand finale in Gdansk following the 6-2 trouncing of Roma in the first leg last week.

Ole Gunnar Solskjaer, though, has a fresh injury concern to contend with ahead of his side’s latest fixture, with Daniel James ruled out of the clash this midweek. However, there is some positive news, with Anthony Martial beginning his rehabilitation from a knee injury, although he, too, is not a part of the travelling squad.

Speaking to the Manchester United media, Solskjaer provided an update on both James and Martial, saying, “We didn’t get any injuries at the weekend. We trained well after that. But Dan James is not available. He’s still out for a little while. Anthony’s looking good. He has just about started outside jogging, which is the first step on the rehab of course.”

“He’s done most of the work in the gym and to see him out there getting some fresh air is good and hopefully we will see him before the season is out. He’s supporting the team, he wants to be a part of the final and he’s working hard to be available before that.”

After inflicting a heavy defeat on Roma in the first leg, it is likely that Solskjaer will rotate his troops to a great extent in order to keep his key players fresh, with Thursday’s game kicking off a run of four games in seven days for Manchester United. In goal, David de Gea ought to start ahead of Dean Henderson, as has become the norm in the Europa League lately.

As for defence, Eric Bailly and Alex Telles could get a look-in, with Bailly pairing up with Victor Lindelof at the heart of the Manchester United backline, while Telles and Aaron Wan-Bissaka will be the two full-backs. Up ahead in midfield, Nemanja Matic should start in the double pivot along with Fred. 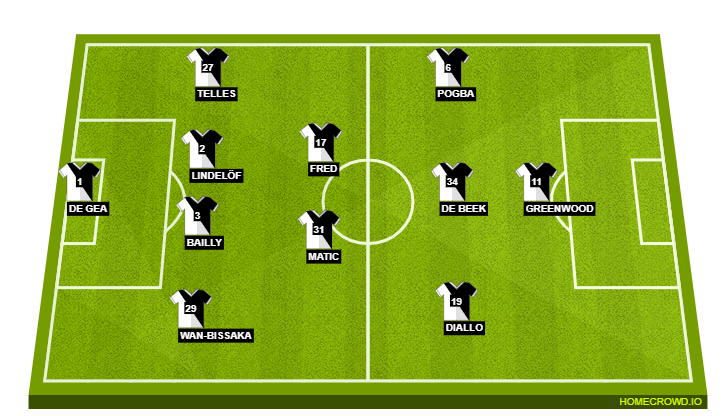 Bruno Fernandes and Marcus Rashford are the likeliest candidates to get a breather ahead of a busy end to the season. Donny van de Beek and Amad Diallo could get a start in their stead, but Paul Pogba should retain his spot on the left wing, largely owing to the absence of James. Finally, Mason Greenwood will likely lead the line for Manchester United against Roma ahead of Edinson Cavani.