Sergino Dest and Ronald Araujo will return while Ousmane Dembele is in contention to feature when Barcelona take on Villarreal on Sunday.

Barcelona will hope to continue keeping the La Liga title race wide open when they lock horns with Villarreal at Estadio de la Ceramica on Sunday evening. And, Ronald Koeman has a positive update on the team news front ahead of his side’s latest fixture.

Ousmane Dembele is a part of the travelling squad after recovering from a minor injury that had forced him to miss the midweek game against Getafe. In addition, Neto is also back at Koeman’s disposal, meaning Miralem Pjanic, Ansu Fati, Philippe Coutinho and Martin Braithwaite are the only absentees for Barcelona.

During his pre-match press conference (h/t Barca Universal), Koeman was asked about Dembele’s availability in addition to the situation of Fati and Coutinho. The Barcelona boss said, “Dembele? All the players called up have the option to play from the beginning. Ansu and Coutinho have been absent for longer than we thought. I don’t know if they will be able to play a game before the end of the season.”

Dembele is unlikely to start, though, with Koeman expected to retain the 3-5-2 formation that has been preferred in recent games, meaning Antoine Griezmann and Lionel Messi will form the strike partnership again. Dembele will, therefore, be an option off the bench as the only attacking alternative at the disposal of the Barcelona manager.

As for midfield, Sergio Busquets, Frenkie de Jong and Pedri pick themselves, considering Riqui Puig hardly features while Ilaix Moriba usually appears off the bench. The only change to the starting lineup will, thus, come in the defensive unit, with Sergino Dest and Ronald Araujo expected to return. 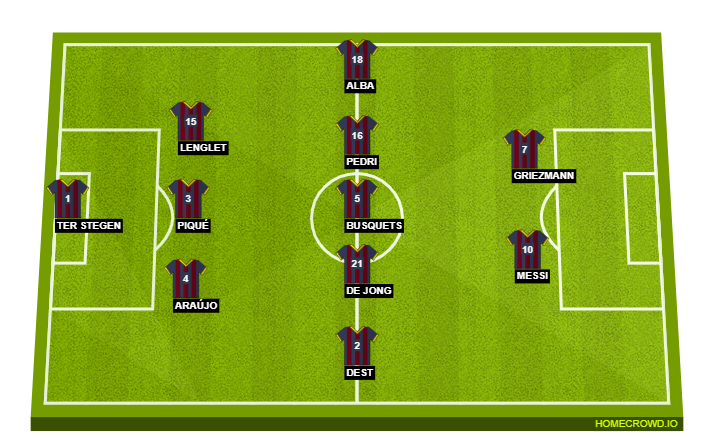 Dest will come in for Sergi Roberto as the right wing-back, with Jordi Alba a certainty on the left flank. Araujo, on the other hand, will likely replace Oscar Mingueza, who got quite a rollicking from Koeman last time out. Gerard Pique and Clement Lenglet will complete the three-man central defensive unit, with Marc-Andre ter Stegen picking himself in the Barcelona goal.