Edouard Mendy and N’Golo Kante will return when Chelsea take on West Ham United at the London Stadium on Saturday.

Chelsea will be hoping to consolidate fourth place in the Premier League standings when they lock horns with West Ham United at the London Stadium on Saturday evening. Heading into the game, Thomas Tuchel does not have any fresh issues on his plate.

The major absentee for Chelsea remains Mateo Kovacic, who is still recovering from a hamstring injury that has rendered him unavailable for nearly a couple of weeks now. During his pre-match press conference, Tuchel provided an update on Kovacic while also revealing that Edouard Mendy is set to start ahead of Kepa Arrizabalaga in goal.

The Chelsea boss said, “Mateo Kovacic is still out but everybody else is available. Mendy is in goal. The change was made for Kepa for the FA Cup game and even before then, the goalkeeper coach and me decided that Kepa would stay one more game after Man City to have it as a reward and feel a bit the rhythm of playing every three days. but the situation in general has not changed so Edou will be in goal tomorrow.”

With Mendy a confirmed starter ahead of Kepa, at least one change is set for Chelsea’s starting lineup. However, with the UEFA Champions League meeting with Real Madrid coming up, there are likely to be a few more alterations, starting with a change in the back three, with captain Cesar Azpilicueta set to return.

The Chelsea skipper will replace Kurt Zouma, meaning Andreas Christensen will slot in at the heart of the central defensive unit, with Antonio Rudiger being the third man at the back. Up ahead in midfield, N’Golo Kante is in line to return after being given a breather earlier this week against Brighton.

Kante will take Mason Mount’s place in the double pivot, where he will have Jorginho as his partner while Mount will move upfield into one of the two attacking midfield slots. The Englishman’s switch in position means Hakim Ziyech could miss out, with Christian Pulisic and Kai Havertz retaining their spots in the final third. 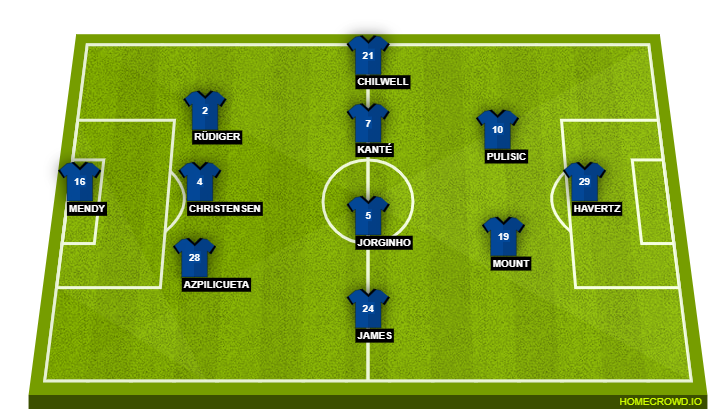 The final change to the starting lineup will come in one of the two wing-back slots, where Tuchel will continue his aggressive rotation, as Ben Chilwell will start in place of Marcos Alonso. Reece James, though, ought to start ahead of Callum Hudson-Odoi as the right wing-back again.