Christian Pulisic and Kai Havertz will return, but Thiago Silva is in line for a rest when Chelsea face Brighton & Hove Albion on Tuesday.

Chelsea will be hoping to reclaim their place inside the top four when they play hosts to Brighton & Hove Albion at Stamford Bridge on Tuesday night. And heading into the game, Thomas Tuchel has one first-team player back at his disposal.

Andreas Christensen has trained over the weekend after recovering from a muscle injury and is in contention to start. However, Mateo Kovacic is still sidelined with a thigh injury, while Thiago Silva could be rested amid the need to manage his minutes in the middle of a fixture congestion.

During his pre-match press conference, Tuchel provided an update on the aforementioned trio. The Chelsea boss said, “I expect Andreas to be back and to be available. He did a very good training session yesterday and I hope this will continue today.”

“With Thiago it’s a bit different, not because of injury but maybe because of acute overload after his injury with the two games. He’s not injured but we have to see if it makes sense that he starts again. I think and I hope that it’s only Kova we have out with injury.”

Silva should indeed be rested, while Christensen is only likely to be eased back in, meaning Kurt Zouma could start at the heart of Chelsea’s three-man central defensive unit, with Antonio Rudiger and captain Cesar Azpilicueta being his partners. In goal, there is no looking past Edouard Mendy, who will replace Kepa Arrizabalaga.

As for the midfield, with Kovacic still unavailable, Tuchel has no choice but to continue with the double pivot of N’Golo Kante and Jorginho, with Billy Gilmour a backup option. The two wing-back positions are also likely to see some rotation, with Callum Hudson-Odoi and Marcos Alonso likely to replace Reece James and Ben Chilwell. 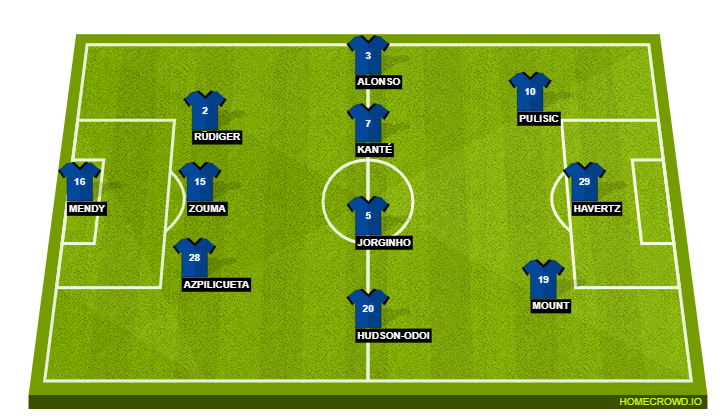 Finally, in attack, a couple of key changes are expected, with Christian Pulisic and Kai Haverz in line to return. Timo Werner and Hakim Ziyech, who combined for the only goal in the FA Cup semi-final win over Manchester City will make way, with Havertz leading the line for Chelsea while Pulisic and Mason Mount will play off of him.