You are here: Home » news » Predicted Liverpool lineup against Aston Villa: Firmino in for Jota; Jones to return
Football News 24/7

Roberto Firmino and Curtis Jones will return, but Diogo Jota will drop to the bench when Liverpool welcome Aston Villa to Anfield on Saturday.

Liverpool will be aiming to keep pace with their rivals in the top four race in the Premier League when they play hosts to Aston Villa at Anfield on Saturday evening. And, Jurgen Klopp does not have any fresh injury concerns to contend with ahead of his side’s latest fixture.

The Liverpool manager continues to miss the services of as many as six players, with Caoimhin Kelleher, Virgil van Dijk, Joe Gomez, Joel Matip, Jordan Henderson and Divock Origi all still on the sidelines. In his pre-match press conference, though, Klopp provided an update on the rest of the squad.

“To be 100 per cent honest, we don’t know yet. We played on Tuesday, flew back on Wednesday, trained yesterday, some players felt still the game. Nobody is injured from the game but we have to see what we make with the information they give us today. Nobody’s injured but if we have to change something you will see tomorrow.”

A few changes could be in order, though, heading into the game against Aston Villa, as Klopp keeps one eye on the upcoming midweek UEFA Champions League quarter-final second leg against Real Madrid. However, Alisson Becker’s place in goal is unchallenged, with the Brazilian goalkeeper set for a busy outing once again.

The defensive line is unlikely to be tinkered with either, with Ozan Kabak and Nathaniel Phillips pairing up at the heart of the Liverpool backline again, while Trent Alexander-Arnold and Andrew Robertson will be the two full-backs. Rhys Williams will, therefore, be the backup defensive option.

Up ahead in midfield, Naby Keita will return to the bench after the experiment to start him failed miserably. In his stead, Thiago Alcantara will be back in the starting lineup, with Fabinho sitting at the base once again. Georginio Wijnaldum, though, will drop out, with Curtis Jones likely to be handed what is now a rare start. 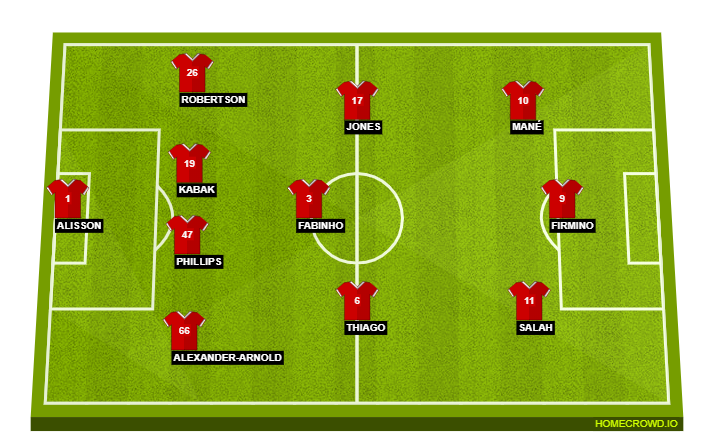 Finally, in attack, the key decision will once again centre around which of Mohamed Salah, Sadio Mane, Roberto Firmino and Diogo Jota miss out against Aston Villa. Jota could drop to the bench, as he did last weekend, meaning Firmino, Mane and Salah will reunite in the final third.

One Response to “Predicted Liverpool lineup against Aston Villa: Firmino in for Jota; Jones to return”