David de Gea and Alex Telles will return while Marcus Rashford will be in contention to feature when Manchester United take on Granada on Thursday.

Manchester United will hope to take a step closer to the semi-finals of the UEFA Europa League when they lock horns with Granada at Nuevo Estadio de Los Carmenes in the quarter-final first leg on Thursday. And, Ole Gunnar Solskjaer has greeted a mixed bag of updates on the team news front ahead of his side’s latest fixture.

There are concerns that Anthony Martial might have played his final game of the season whereas Eric Bailly is unavailable after testing positive for COVID-19. In some good news, though, Marcus Rashford is a part of the travelling squad, while Alex Telles and Juan Mata have recovered from their respective issues to make the trip to Granada.

Speaking to the Manchester United media, Solskjaer provided an update on team news. He said, “I can’t disclose my team now. We’re not going to do that. Marcus is travelling and we have to make a decision tomorrow if he starts or is on the bench. I don’t think he’ll play the 90 minutes.”

“Marcus is okay-ish. He’s trained this morning. He’s available to be selected, as I said, either as a sub or a starter. Juan [Mata] is back training as is Alex [Telles], so we’re looking stronger definitely. We didn’t lose anyone last weekend against Brighton.”

Judging by the update on Rashford, it looks like the English international might only be fit enough to make an appearance off the bench, especially keeping the key fixture against Tottenham Hotspur later this week in mind. In his stead, Daniel James should start on the left wing, with Mason Greenwood starting on the right flank again.

Edinson Cavani will lead the line for Manchester United against Granada, especially with no other senior option at Solskjaer’s disposal in way of alternative. Playing off of Cavani will be Bruno Fernandes, who will reprise the no. 10 role, meaning Donny van de Beek could miss out again, seeing as Paul Pogba and Fred ought to continue their pairing in the midfield double pivot. 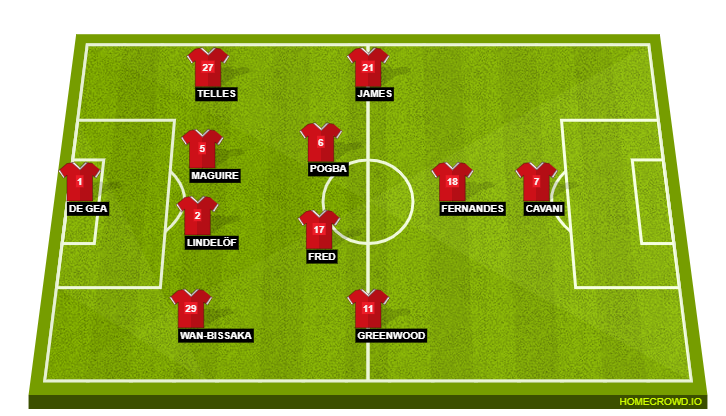 Bailly’s absence due to coronavirus contraction means Victor Lindelof and Harry Maguire will pair up at the heart of the Manchester United defence once more, but Alex Telles could come in for Luke Shaw in the left-back berth, while Aaron Wan-Bissaka is a certainty on the opposite flank. Finally, in goal, David de Gea could get the chance to impress, replacing Dean Henderson.