You are here: Home » news » Predicted Liverpool lineup against Real Madrid: Jota in for Mane; Wijnaldum to return
Football News 24/7

Diogo Jota and Georginio Wijnaldum could return, but Sadio Mane will miss out when Liverpool face Real Madrid in the Champions League on Tuesday.

Liverpool will be raring to take a major step towards the UEFA Champions League semi-finals when they lock horns with Real Madrid in the quarter-final first leg at Estadio Alfredo Di Stefano on Tuesday night. And, Jurgen Klopp does not have any fresh issues to deal with ahead of his side’s latest fixture.

The likes of Virgil van Dijk, Joel Matip, Joe Gomez and captain Jordan Henderson are all long-term absentees, with Caoimhin Kelleher and Divock Origi on the sidelines as well. Klopp, therefore, takes Liverpool to the Spanish capital to take on Real Madrid with pretty much an unchanged squad from the weekend.

That means Liverpool should once again line up in a 4-3-3 formation, with Fabinho starring in the midfield for a fourth successive game. Fabinho’s presence in the middle of the park means Ozan Kabak and Nathaniel Phillips will form the central defensive partnership, with Andrew Robertson and Trent Alexander-Arnold being the two full-backs. Meanwhile, in goal, there is no looking past Alisson Becker.

As iterated already, Fabinho will start in midfield again, sitting at the base of the three-man unit, wherein Thiago Alcantara is another certain starter. As for the final midfield spot, James Milner is likely to make way for Georginio Wijnaldum, with the veteran midfielder being an option on the bench along with Naby Keita and Alex Oxlade-Chamberlain.

The big question ahead of the UEFA Champions League tie against Real Madrid has centred around how Klopp would utilise the star attacking quartet of Sadio Mane, Mohamed Salah, Diogo Jota and Roberto Firmino. Indeed, the Liverpool boss was quizzed on the subject during his pre-match press conference.

“You have to wait until the first whistle tomorrow night. Did Zinedine say anything about the line-up in the press conference? We will see what we do with that. But it looked good [against Arsenal], hey? It looked really good. It looked good in the first half at least against Man City as well, I liked it a lot. There will be a moment when we give it a try. Is it tomorrow? We will see.” 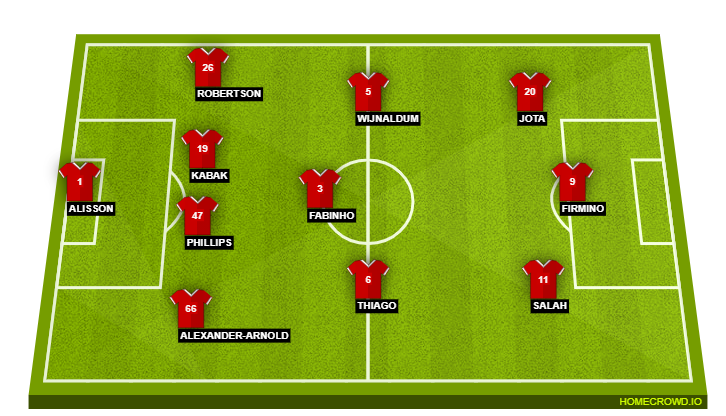