Mason Mount and N’Golo Kante are set to return while Kai Havertz will start again when Chelsea take on Leeds United on Saturday.

Chelsea will be aiming to continue their fine unbeaten run when they lock horns with Leeds United at Elland Road on Saturday afternoon. And, Thomas Tuchel has one fresh injury concern to deal with ahead of his side’s latest fixture.

Tammy Abraham was already on the sidelines due to his ongoing recovery from an ankle injury. The Englishman is yet to be back at Tuchel’s disposal, with the Chelsea manager now also having to make do without veteran defender Thiago Silva, who has suffered a recurrence of his recent thigh injury.

Tuchel provided an update on the duo during his pre-match press conference, saying, “Thiago had a little setback in training at the end of the training session the day before yesterday. He felt at the very end something around the same area where he was injured so we had to take him off, so he is back into a transition phase but not back into team training.”

“Tammy Abraham has still the ankle pain from the tackle against Burnley. Yesterday he came off [in training], the day before he was fine, so these two are out for tomorrow and everybody else is available.”

Silva’s continued absence does not pose a major concern, with Andreas Christensen deputising brilliantly for the Brazilian. The Dane will have Antonio Rudiger and captain Cesar Azpilicueta for company in the three-man central defensive unit, with Edouard Mendy retaining his spot in goal.

Up ahead in midfield, N’Golo Kante is a certainty to return after having been afforded a breather last time out against Everton. The Frenchman will come in for Jorginho, with Mateo Kovacic starting alongside him in the middle of the park. Out wide, Reece James will continue as the right wing-back, but Ben Chilwell should replace Marcos Alonso. 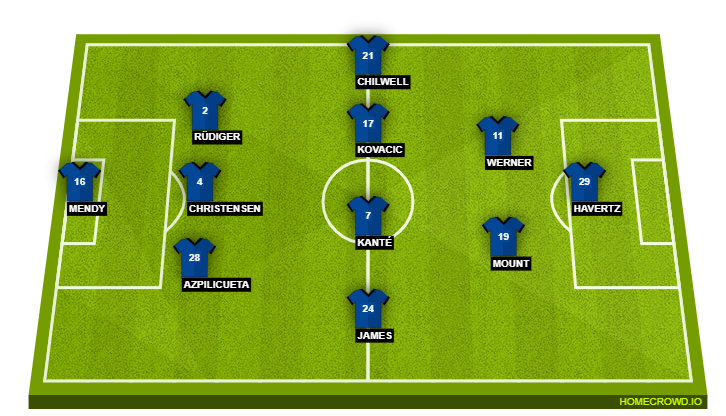 Finally, in attack, it is likely that Kai Havertz will keep hold of his spot in the side and the German international is set to reprise the false nine role. Compatriot Timo Werner also ought to start as one of the two attacking midfielders, despite question marks being raised over his future. The final spot will be taken up by Mason Mount, who will start in place of Callum Hudson-Odoi.