Ronald Araujo is a major doubt but Pedri is fit and in contention to start when Barcelona take on Sevilla in the Copa del Rey semi-final second leg.

Barcelona will be aiming to overturn a first-leg deficit and qualify for the finals of the Copa del Rey when they lock horns with Sevilla at Camp Nou on Wednesday night.

Heading into the game, manager Ronald Koeman has been handed mixed news on the injury front as Ronald Araujo is a major doubt after having only returned to fitness in the last game. Pedri, however, is fit and available after having come off with an injury in the weekend La Liga clash against Sevilla.

Addressing the duo’s situation in his pre-match presser, Koeman said (h/t Barca Blaugranes): “Yesterday afternoon I was pretty surprised he [Pedri] was training by himself but he said he wasn’t feeling any pain. This morning he trained without any problems. We have to wait for tomorrow but we think that yes he could be in the squad.”

“He [Araujo] didn’t train with the group because he still has some nagging injuries. We’ll wait until tomorrow until we can decide if we can count on him or not.” Apart from Araujo, Ansu Fati, Philippe Coutinho, Sergi Roberto and Miralem Pjanic are unavailable due to injuries.

Koeman set his team up in a 3-5-2 formation in the league game against Sevilla, which worked quite well. And on Wednesday, the Barcelona manager is expected to stick with a similar setup against Julen Lopetegui’s men in the crucial cup tie.

There is no looking past the brilliant Marc-Andre ter Stegen between the sticks for the Catalans. Oscar Mingueza, who has been very impressive of late, should hold on to his place in the three-man backline along with Gerard Pique but there could be a change in the offing as Samuel Umtiti replaces compatriot Clement Lenglet.

Sergino Dest, who looked bright in the wing-back role in the league game, should continue on the right side while Jordi Alba is the undisputed starter as the left-sided wing-back for Barcelona. 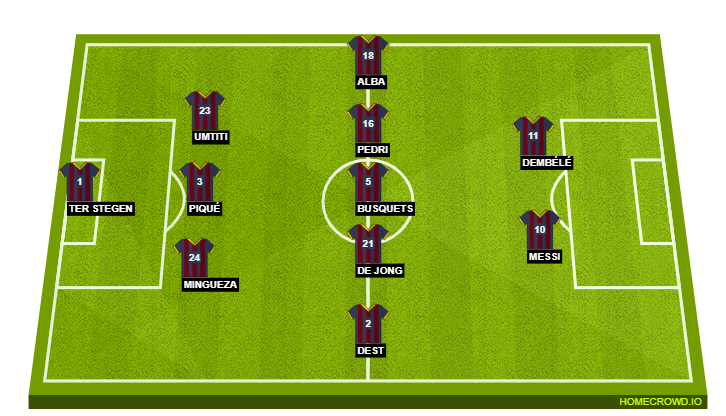 With Pedri set to be available for the game, he should start in the centre of the park alongside Frenkie de Jong and Sergio Busquets. Ilaix Moriba, who was a bright spark in his cameo in the league game against Sevilla, is also an option at the manager’s disposal, along with Riqui Puig.

Up front, Lionel Messi and Ousmane Dembele caused a lot of problems to the Sevilla defence at the weekend and should be retained on Wednesday night, meaning Antoine Griezmann remains out on the bench once again.