You are here: Home » news » Predicted Arsenal lineup against Leeds United: Ceballos in for Partey; Aubameyang to return
Football News 24/7

Pierre-Emerick Aubameyang and Dani Ceballos will return, but Thomas Partey misses out when Arsenal take on Leeds United on Sunday.

Arsenal will be hoping to get their Premier League campaign back on track when they play hosts to Leeds United at the Emirates on Sunday evening. And, Mikel Arteta greeted the press with a mixed bag of updates on the team news front ahead of his side’s latest fixture.

The bad news comes in the form of Thomas Partey’s absence, with the Ghanaian midfielder picking up yet another injury. This time, Partey is sidelined with a hamstring injury and he has joined Kieran Tierney on the sidelines.

As for the positive update, Bernd Leno and David Luiz are now back in contention after serving their respective one-match suspensions. Meanwhile, Arteta provided information on Partey and Tierney pre-match press conference, informing the media about the duration of the duo’s absence.

“It is a difficult one, he [Partey] felt something during the game and we didn’t think it was too bad but after the scan looked a little bit worse. He won’t be available to play against Leeds and we will see how it evolves in the next two days but it is a muscular issue.”

“We have to see how the knee reacts when he [Tierney] starts to get a bit more load. He hasn’t had much left but he is very positive at the moment, he is in good spirits and he is desperate to get back in the team and we will see in the next few days, the moment he starts to train with the team and se how he is feeling and how he reacts.”

In Tierney’s continued absence, Arteta has no choice but to deploy Cedric Soares as the makeshift left-back, with Hector Bellerin starting on the right flank again. At the heart of the Arsenal defence, David Luiz should come in for Gabriel Magalhaes to form the central defensive partnership along with Rob Holding, while in goal, Leno is a certainty to start ahead of Mat Ryan. 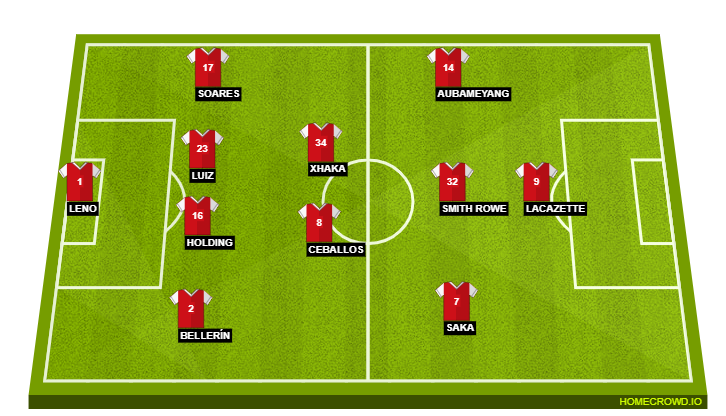 Up ahead in midfield, Partey’s unavailability means Dani Ceballos should start in his stead in the double pivot, where he will provide company to Granit Xhaka. Meanwhile, Emile Smith Rowe will continue reprising the no. 10 role, meaning Martin Odegaard continues to wait for his full debut.

In attack, Bukayo Saka and Alexandre Lacazette pick themselves, but the final spot should be taken up by Pierre-Emerick Aubameyang, who will replace Nicolas Pepe. Aubameyang has been the embodiment of Arsenal’s inconsistencies this season, and will be hoping to finally regain some form as the second half of the season gets into full gear.