Mat Ryan is set for his debut while Bernd Leno and David Luiz miss out due to their respective suspensions when Arsenal take on Aston Villa on Saturday.

Arsenal will be eager to resume their charge for a top six finish by bouncing back to winning ways when they lock horns with Aston Villa at Villa Park on Saturday afternoon. And, Mikel Arteta has been dealt with a double blow on the team news front ahead of his side’s latest fixture.

Bernd Leno and David Luiz are both suspended for the game after being sent off in the midweek fixture against Wolves. While Leno’s ban was never going to be overturned, Arsenal had been hoping that they could get Luiz’s red card rescinded after lodging an appeal against it. However, the FA has upheld the decision made in the match, meaning Luiz is unavailable.

Therefore, Arteta will make at least two forced changes against Aston Villa and in his pre-match press conference, the Arsenal boss had plenty to discuss, including the goalkeeping situation, seeing as the big debate invariably is about who will deputise for Leno.

Ryan, though, was able to train on Friday, as per the official team news update, meaning he is in line to make his Arsenal debut, with Runar Alex Runarsson missing out due to his underconfident displays in goal so far for the Gunners. Another positive comes in the form of Pablo Mari’s availability, with the Spaniard joining full training as well.

Mari, though, is unlikely to start, with Gabriel Magalhaes likely to replace Luiz at the heart of the Arsenal defence, where he will accompany Rob Holding. Out wide, Hector Bellerin and Cedric Soares will continue as the two full-backs, considering Kieran Tierney is still unavailable due to his lower leg injury.

Up ahead in midfield, Granit Xhaka and Thomas Partey pick themselves in the double pivot, with Dani Ceballos missing out. Emile Smith Rowe will continue reprising the no. 10 role, meaning Martin Odegaard continues to wait for his full debut. As for the remaining three spots in attack, there is fierce competition for one of the spots, something Arteta was asked to comment on. 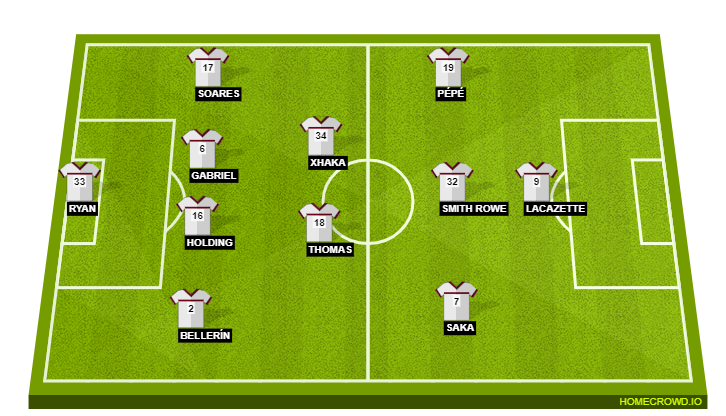 Asked whether Nicolas Pepe could be dropped in favour of captain Pierre-Emerick Aubameyang, the Arsenal boss said, “At the end of the day, we have to play the players who are in the best form and everybody has to earn the right to play and participate in the games. That’s what everybody’s doing, pushing each other to raise the level.”

Judging by Arteta’s comments, it seems as if the in-form Pepe is likely to keep hold of his spot, with Aubameyang continuing to build his sharpness with another appearance off the bench. As for the final two spots, there is no looking past Bukayo Saka and Alexandre Lacazette.