You are here: Home » news » Predicted Barcelona lineup against Granada: Busquets in for de Jong; Roberto to return
Football News 24/7

Sergio Busquets and Sergi Roberto will return while Frenkie de Jong will be rested when Barcelona face Granada in the Copa del Rey quarter-final on Wednesday.

Barcelona will be eager to book their place in the Copa del Rey semi-finals when they lock horns with Granada at Estadio Nuevo Los Carmenes on Wednesday night. And, Ronald Koeman has been handed a double boost ahead of his side’s latest fixture.

Sergio Busquets is available again after missing the previous fixture due to a one-match suspension in La Liga. The veteran Spaniard should be reinstated in the starting lineup, coming in for Frenkie de Jong, who will receive a well-deserved breather against Granada. In another piece of good news, Sergino Dest is available again and part of the travelling squad after recovering from a thigh injury.

Dest, though, is unlikely to return straightaway, with Sergi Roberto instead likely to be handed a start by Koeman. As for those missing the trip to Granada, the likes of Gerard Pique, Philippe Coutinho and Ansu Fati are still in the process of recovering from their respective injuries.

And, Koeman provided an update on Pique and Fati during his pre-match press conference. The Barcelona manager said, “Hopefully, they can recover in time for the games against PSG, but we don’t know for sure. They are on the road to a complete recovery, so we will see.”

In Pique’s absence, the likes of Ronald Araujo and Samuel Umtiti have both stepped up admirably and Koeman spoke about Umtiti in his presser. “Umtiti has been out for a long time because of an injury. He has recovered well and we are counting on him. Every player has to prove his worth and no one knows what the future might hold.” 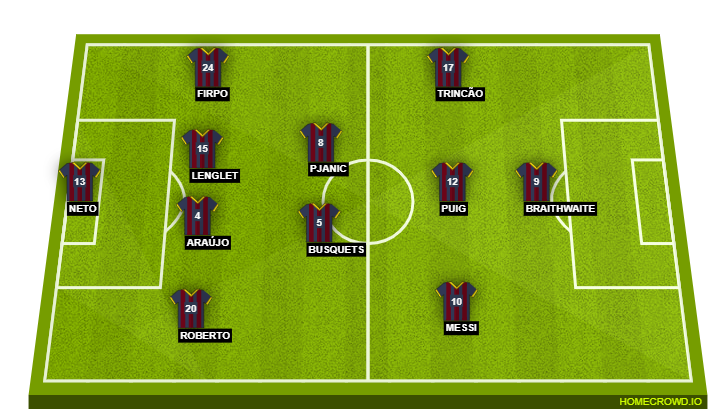 Umtiti, though, could be rested against Granada, with Clement Lenglet starting alongside Araujo at the heart of the Barcelona defence. The visitors’ backline will be completed by Junior Firpo, who will come in for Jordi Alba for another start in the Copa del Rey, and the same goes for Neto, who will take his customary place in goal for a cup tie.

Up ahead in midfield, Busquets will pair up with Miralem Pjanic in the double pivot, with Riqui Puig set to be deployed in the no. 10 role, as Koeman gives him a chance to impress. Finally, Lionel Messi is likely to be the only attacker to retain his spot in the final third, with Martin Braithwaite and Francisco Trincao set to come in for Ousmane Dembele and Antoine Griezmann.