Kieran Tierney and Thomas Partey are set to return but Pierre-Emerick Aubameyang will miss out again when Arsenal take on Southampton on Tuesday.

Arsenal will be hoping to continue their recent unbeaten run in the Premier League when they lock horns with Southampton at St. Mary’s Stadium on Tuesday night. And, Mikel Arteta does not have any fresh roster issues to contend with ahead of his side’s latest fixture.

However, Pierre-Emerick Aubameyang remains unavailable due to the personal issue that forced him to miss last weekend’s FA Cup tie against Southampton. Apart from the Arsenal captain, Pablo Mari is also sidelined, while Dani Ceballos’s participation is touch and go.

Meanwhile, with Martin Odegaard’s loan move still not over the line, it is likely that the Norwegian will only be available on the weekend at the earliest. As for the Southampton game, Arteta spoke about Aubameyang during his pre-match press conference.

The Arsenal boss said in his presser, “Of course it will be a problem because he is a top striker, one who scores [a lot of] goals and he is our captain, a really important player in the team. But we have to respect the timings, let’s see – I don’t have enough information to see how things are evolving and hopefully, things will go in the right direction.”

Aubameyang’s continued absence means Gabriel Martinelli will get another start on the left flank, with Alexandre Lacazette set to return to the side to lead the line for Arsenal against Southampton. The remainder of the Arsenal attack will be comprised of Emile Smith Rowe and Bukayo Saka, with Nicolas Pepe and Willian set to make way for the young duo.

In midfield, Thomas Partey ought to be back in the starting lineup after being given a breather in the cup tie against Southampton. Partey will pair up with former Arsenal captain Granit Xhaka in the double pivot, with Mohamed Elneny dropping to the bench. 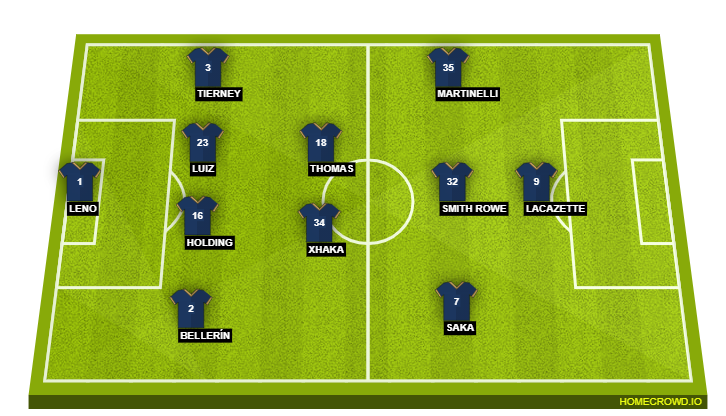 As for defence, a couple of changes are in order. Kieran Tierney is a certainty to replace Cedric Soares in the left-back slot, with Hector Bellerin starting on the right flank again. At the heart of the Arsenal defence, David Luiz should come in for compatriot Gabriel Magalhaes, partnering Rob Holding. Finally, Bernd Leno picks himself to feature in the Arsenal goal.