You are here: Home » news » Predicted Manchester United lineup against Fulham: Telles in for Shaw; Greenwood to return
Football News 24/7

Alex Telles and Mason Greenwood will return while Luke Shaw could be rested when Manchester United take on Fulham at Craven Cottage on Wednesday.

Manchester United will be hoping to reclaim top spot in the Premier League standings when they lock horns with Fulham at Craven Cottage on Wednesday night. And, Ole Gunnar Solskjaer has no fresh injury concerns to contend with ahead of his side’s latest fixture.

The likes of Brandon Williams, Phil Jones, Marcos Rojo and Facundo Pellistri continue to remain unavailable for Manchester United. However, with none of them being in contention for a place in the starting lineup anyway, their absence hardly hurts the visitors.

Solskjaer did provide a general team news update in an interview with the Manchester United media, saying, “It’s only been two days since we played but they’re vibrant again, ready to go. We’ve not got the COVID tests back yet, the results of them, so hopefully they’ll all pass through them and there shouldn’t be many changes.”

Having said that, with one eye on another big game against Liverpool, this time in the FA Cup this weekend, a few changes could be in the offing. In goal, there is no replacing David de Gea, with Dean Henderson expected to get a run in the cup tie instead. In front of him, a couple of changes are on the cards.

Alex Telles ought to replace Luke Shaw, who is due a rest, while Eric Bailly should come in for Victor Lindelof, who will be given a breather amid his battle with a persistent back problem. Bailly will pair up with captain Harry Maguire at the heart of the Manchester United defence, with Telles and Aaron Wan-Bissaka being the two full-backs.

Up ahead in midfield, Fred and Scott McTominay will likely drop to the bench, with the duo set to be preserved for the game against Liverpool. This decision means that Paul Pogba should slot in the double pivot, with Nemanja Matic expected to be his midfield partner. Bruno Fernandes will once again reprise the no. 10 role, meaning Donny van de Beek misses out. 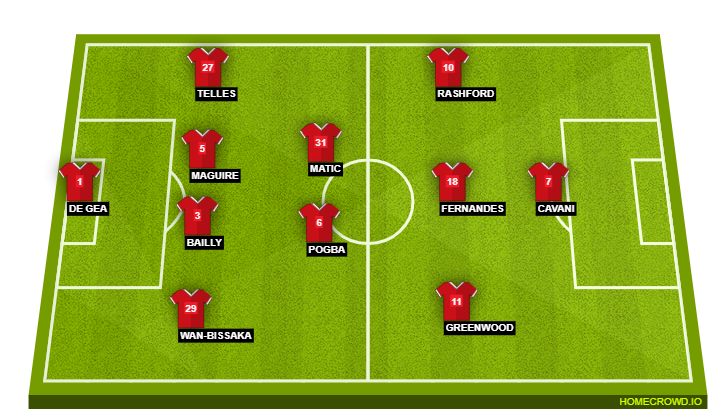 Finally, in attack, a couple of shuffles are on the cards. Marcus Rashford should be deployed on the left flank after leading the line against Liverpool. In his stead, Edinson Cavani should spearhead the Manchester United attack versus Fulham, with Anthony Martial dropping to the bench. Martial’s relegation to the bench means Mason Greenwood ought to return on the right wing.