Pierre-Emerick Aubameyang and Bernd Leno are in line to return while Bukayo Saka will be in contention when Arsenal face Wolves on Sunday.

Arsenal will be desperate to return to winning ways in the Premier League when they play hosts to Wolverhampton Wanderers at the Emirates on Sunday night. And, Mikel Arteta has a few nagging injury concerns hampering his preparations ahead of the visit of Wolves.

David Luiz picked up a knock earlier this week in the UEFA Europa League tie with Molde. Arteta did speak about the Brazilian during his most recent press update, the post-match conference on Thursday and the Arsenal boss was hopeful of his recovery.

“We hope that he is okay. These surfaces bring different challenges to some players that have issues in their bodies, and it is quite aggressive to play on this surface so we wanted to take zero risk on that. It is okay, he should be fine.”

There is some good news too for Arsenal, with Mohamed Elneny available for selection, as per the official team news, after recovering from the coronavirus. However, Sead Kolasinac remains in self-isolation due to his recovery from COVID-19. Apart from the Bosnian, Nicolas Pepe also misses out due his three-match suspension after being sent off against Leeds United last week.

The likes of Calum Chambers, Pablo Mari and Gabriel Martinelli are all long-term absentees who have rejoined training and inching closer to their return. However, they are unavailable for the visit of Wolves, and with Luiz unlikely to start, Rob Holding and Gabriel Magalhaes should pair up at the heart of the Arsenal defence.

The entire backline will revert to the first-choice setup, with Kieran Tierney and Hector Bellerin set to be installed as the full-backs, while Bernd Leno will be the man in goal. Up ahead in midfield, the fitness of Thomas Partey continues to be monitored, and he is likely to miss out.

As a result, Granit Xhaka and Dani Ceballos will combine in the double pivot, with Joe Willock moving to the advanced midfield slot. In attack, Willian is fit and available, while Bukayo Saka will face a late fitness test ahead of the game. 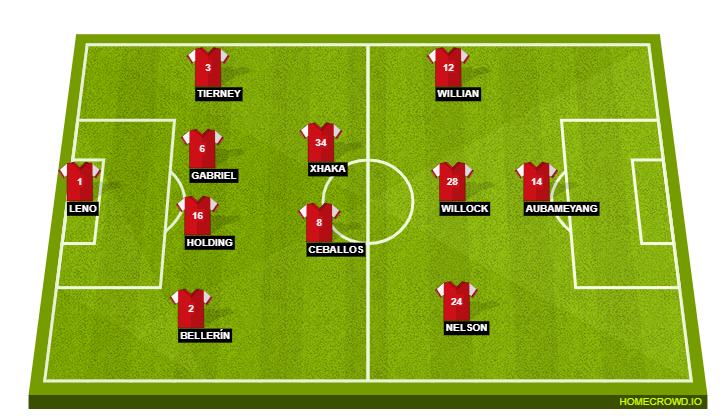 Arteta might not take a risk with Saka’s fitness, meaning Willian should return in the wide areas, with Reiss Nelson continuing his run in the side after an impressive display at Molde. Finally, Pierre-Emerick Aubameyang will lead the line for Arsenal against Wolves, replacing Alexandre Lacazette.