Mikel Arteta is set to ring in the changes when Arsenal face Leicester City in the third round of the Carabao Cup on Wednesday night.

Following a narrow victory over West Ham United, Arsenal will look to continue their winning momentum when they lock horns with Leicester City on Wednesday, in the third round of the Carabao Cup on Wednesday night.

However, with the Gunners prioritising a top four finish in the Premier League this term, the focus will be on Monday’s key fixture against champions Liverpool. So, Mikel Arteta could ring in the changes as he looks to cope with the hectic schedule of the 2020/21 campaign.

Unfortunately, the Spaniard is missing a number of players, especially in the defensive department. Sokratis, Pablo Mari, Shkodran Mustafi and Calum Chambers have all been ruled out while Kieran Tierney will not feature either after picking up a knock against West Ham.

On the bright side, however, David Luiz is back in contention and should lead Arsenal’s backline alongside Rob Holding, while William Saliba should make his Arsenal debut, replacing Tierney on the left side of the defense.

There could be another new face in the Arsenal defense and this time in goal, with new signing Runar Alex Runarsson replacing Bernd Leno. The Iceland international trained with the team ahead of this fixture and should get the nod ahead of Matt Macey.

“I’m just extremely happy, extremely proud, it is a big day for me and my family. I can’t wait to get started!” Runarsson told Arsenal.com, after signing for the club. It will be interesting to see whether or not he can replace Emiliano Martinez in goal.

In midfield, Mesut Ozil has trained with the team this week. He might make the squad after a long time, although it is unlikely he will feature in the starting lineup. Mohamed Elneny and Dani Ceballos are the favorites to form the double pivot as of now, with Granit Xhaka getting a breather. 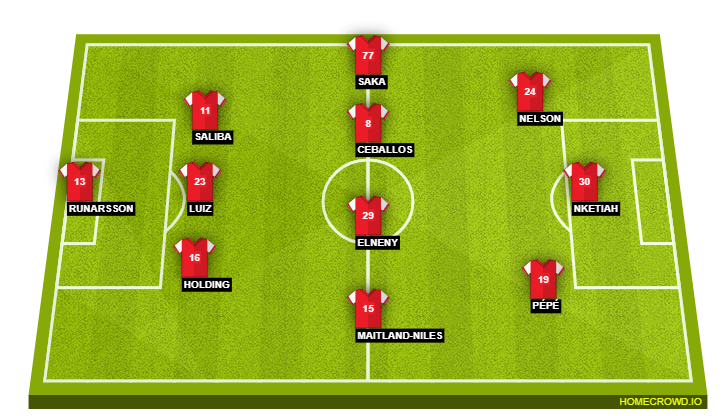 Elsewhere, Cedric Soares is unfortunately unavailable. He has a problem in his right calf, forcing Arsenal to leave him out of the team. It should pave the way for Ainsley Maitland-Niles to return to his duties at right wing-back, with Bukayo Saka occupying the opposite flank.

Saka operating at left wing-back should open up an opportunity for Reiss Nelson to get a rare start, especially as Arteta is likely to give Pierre-Emerick Aubameyang a breather. The same applies to Willian, who could make way for Nicolas Pepe on the opposite flank while Alexandre Lacazette is set to be replaced by Eddie Nketiah in the number nine role.