Chelsea will be hoping to consolidate fourth place on the Premier League table when they play hosts to Tottenham at Stamford Bridge on Saturday afternoon. And, Frank Lampard has received a major boost ahead of his side’s latest fixture.

Andreas Christensen has sufficiently recovered to train ahead of the visit of Tottenham after breaking his nose in Chelsea’s league game against Manchester United earlier this week. The Dane is hoping to feature after getting a mask created to help him return quickly.

Lampard provided an update on Christensen during his pre-match press conference, suggesting that he could be ready to take on Tottenham on Saturday. The Chelsea boss said, “Andreas went to get a mask for a broken nose, which he has now got and has trained with. He’s available for selection, albeit with a mask.”

Andreas Christensen is hoping to return after breaking his nose against Manchester United earlier this week. (Photo by Shaun Botterill/Getty Images)

“He’s trained two days at a good level, where there has been contact and heading to do. He’s been playing so well; Andreas is in great form. We will have to see if he’s ready, because this is going to be a battle and as a centre-back you need to be confident you can take contact.”

Going by Lampard’s comments, it is likely that Christensen could keep his place at the heart of the Chelsea defence alongside Antonio Rudiger. The full-back pairing also ought to remain unchanged, with Reece James and Cesar Azpilicueta expected to continue. In goal, however, Kepa Arrizabalaga should return, after Willy Caballero failed to make an impression in his two outings.

The big blow ahead of the visit of Tottenham has been in the form of N’Golo Kante’s injury. The Frenchman is out with a fresh muscle injury which is likely to keep him out for three weeks. In his absence, Lampard could revert to the 4-2-3-1 formation, with Mateo Kovacic and Chelsea vice-captain Jorginho placed in the midfield double pivot.

The shift in formation also means Mason Mount is in line to return. Mount will reprise the no. 10 role, which could be essayed by Ruben Loftus-Cheek towards the end of the game. 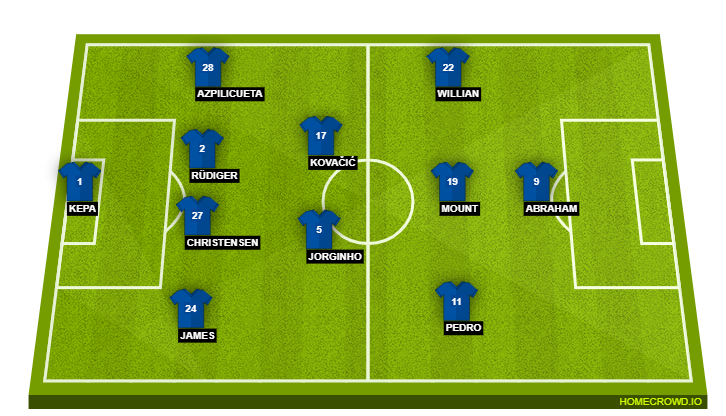 Indeed, Lampard confirmed that Loftus-Cheek is set to make his long-awaited return from Achilles injury, albeit in the form of a substitute in Chelsea’s matchday squad against Tottenham. An update on Tammy Abraham was also provided.

“Ruben [Loftus-Cheek] is in the squad. He’s not fit to start, but great to have him in the squad. Tammy [Abraham] has trained the last two days probably at about 70 per cent having not trained much recently. He’s in the squad but I’ll have to make a decision on whether he’s fit.”

After seeing Michy Batshuayi struggle in his absence, it is likely that Abraham will get the nod to lead the line for Chelsea against Tottenham. Mount will play off Abraham, with Willian and Pedro likely to flank him, considering Christian Pulisic is still out and Callum Hudson-Odoi might not be fully fit to start.