Fabinho could replace Alex Oxlade-Chamberlain while Joel Matip will be in contention when Liverpool take on Wolves on Thursday.

Liverpool will be aiming to continue their brilliant run of form when they lock horns with Wolves at Molineux on Thursday night. And, manager Jurgen Klopp is on the verge of having a full strength squad at his disposal.

The latest player to rejoin first-team training is Dejan Lovren, who returned to practice sessions earlier this week. Klopp provided an update on the Croat during his pre-match press conference, as well as the likes of Naby Keita, James Milner and Xherdan Shaqiri, who are all nearing their returns.

Joel Matip will be in contention to feature. (Photo by Paul Ellis/AFP/Getty Images)

The match, though, will have come too soon for Lovren, who is likely to return to action when Liverpool take on Shrewsbury in the FA Cup this weekend. Another centre-back, Joel Matip, is in contention to feature on Thursday.

However, Matip, like Lovren, might be recalled in the cup tie, meaning Joe Gomez partners Virgil van Dijk at the heart of the Liverpool defence once again. Out wide, there is no looking past Trent Alexander-Arnold and Andrew Robertson to form the full-back pairing once again, while Alisson Becker will take his place in goal.

Up ahead in midfield, the big decision that Klopp needs to make surrounds Fabinho. The Brazilian midfielder made a cameo appearance last weekend, when Liverpool beat Manchester United. Klopp did make a comment on Fabinho, but remained coy when posed the question over his involvement against Wolves.

“It was a long time out. Not too long, thank God, but it was long enough, so he needs to find rhythm again and then we will see how we introduce him step by step. But [it’s the] best news you can get that we have these boys back.”

“Our fifth centre-half Fabinho, who can play the position as well, was injured as well, so it was really tough. But he had a few minutes and that was good for him as well. [He’s] getting closer and closer.” 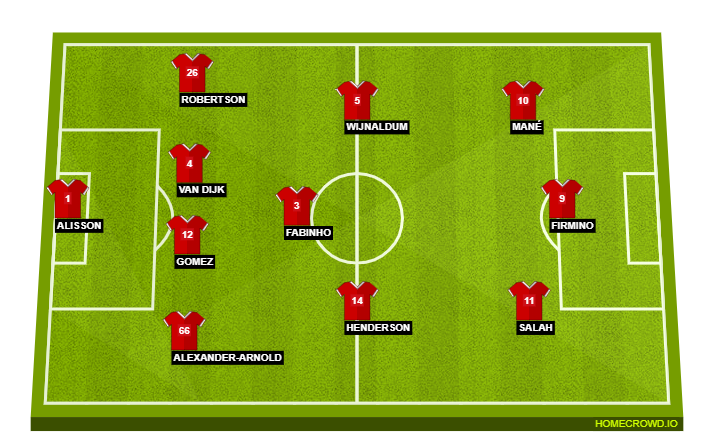 Fabinho might make his first start since November, starting at the base of the three-man midfield, with Alex Oxlade-Chamberlain making way. Liverpool captain Jordan Henderson will take the spot vacated by Oxlade-Chamberlain, with Georginio Wijnaldum completing the midfield trifecta.

In Liverpool’s three-pronged attack, Mohamed Salah, Roberto Firmino and Sadio Mane, who netted in the reverse fixture against Wolves, pick themselves, leaving Divock Origi and Takumi Minamino as backup options.