Naby Keita is likely to replace Adam Lallana while Takumi Minamino is ruled out for Liverpool’s Premier League clash against Sheffield United.

Liverpool will have the chance to retain their 13-point lead atop the Premier League table when they play hosts to Sheffield United at Anfield on Thursday night. And, Jurgen Klopp does not have any fresh injury concerns to deal with ahead of his side’s latest fixtures.

The Liverpool talked about his preparations for the visit of Sheffield United during his pre-match press conference, iterating that his squad has had a proper recovery in the last few days.

“When you have only three days in between it is tricky and you saw that against Wolves, but four days is a proper recovery and that’s OK, so you don’t have to think too much about it. After that there is another game immediately and only three days, which is tricky again, but it’s the job to do.”

Adam Lallana is likely to drop down to the bench. (Photo by Clive Brunskill/Getty Images)

Klopp’s comments suggest that there is unlikely to be heavy rotations against Sheffield United. Alisson Becker will retain his place in goal, with the back four expected to remain unchanged as well.

Trent Alexander-Arnold and Andrew Robertson should both start considering how influential the Sheffield United wing-backs are, while Joe Gomez and Virgil van Dijk are automatic picks at the heart of the Liverpool defence due to the continued absence of Joel Matip and Dejan Lovren. Klopp provided an update on Lovren and Matip, as well as Alex Oxlade-Chamberlain and Fabinho.

“[They are] all in a good way but from the longer-term injuries there is nobody back. [They] are doing more pitch sessions, running and stuff like that. Ox looks good, Joel looks good, Fabinho looks good, Shaqiri looks good [and] Lovren looks good, but not ready. They need still some time, as we said before, so it will be the same group like the last game.” 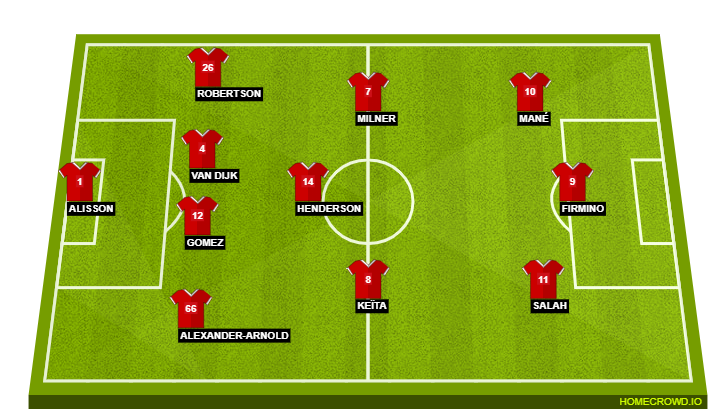 With Fabinho and Oxlade-Chamberlain still out, the rotations in midfield will be restricted. Liverpool captain Jordan Henderson ought to start, but Naby Keita is likely to return to the starting lineup in place of Adam Lallana, despite Lallana’s positive showing last time out. Henderson and Keita are likely to be accompanied by James Milner, with Georginio Wijnaldum due a rest.

Up ahead in attack, Takumi Minamino is ruled out due to Premier League’s rules pertaining to January signings. Minamino will, thus, likely make his Liverpool debut in the FA Cup this weekend, meaning Mohamed Salah, Roberto Firmino and Sadio Mane will start again, leaving Divock Origi and Xherdan Shaqiri as backup options.