Caoimhin Kelleher will come into the side in place of Alisson when Liverpool welcome Arsenal to Anfield in the Carabao Cup on Wednesday.

Liverpool will be aiming to book their place in the Carabao Cup quarter-finals when they play hosts to Arsenal in a fourth round fixture at Anfield on Wednesday night. And, Jurgen Klopp is set to ring in the changes, with youngsters and fringe players in line for rare starts.

Pep Lijnders faced the press instead of Jurgen Klopp on Tuesday and during his conference, the Liverpool assistant manager iterated that the starting lineup will have a mixture of youth and experience.

“We will have line-up who is hungry, who is fresh and who wants to prove a point. So, I think our squad is not big but it doesn’t make sense and it would really not be intelligent to make it even smaller by not using its strength, and one of its strengths in my opinion is the power of the youth with experience. That mixture can bring amazing processes.” 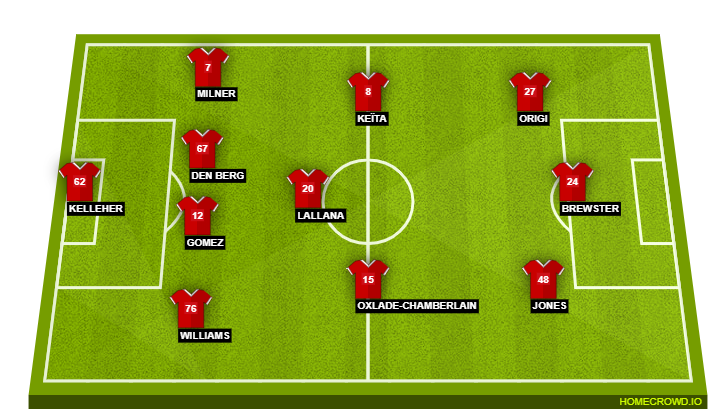 One player who is set to benefit from the policy of rotation for cup fixtures is Caoimhin Kelleher. While Adrian is first-choice goalkeeper Alisson Becker’s deputy, Lijnders has made clear that Kelleher is a certain starter in the Carabao Cup.

“For us, Ali is our No.1 – more than a No.1 I would say! We have Adrian, who did an unbelievable job and if something happens with Ali, Adrian is our No.2 and then has to do the job. But in this League Cup, it is Caoimhin’s competition. He had a good game and he is preparing for another one. It will be special for him playing at Anfield.”

Kelleher will, thus, come into the starting lineup in place of Alisson, with the defensive line in front of him set to be shuffled as well. Joe Gomez will get a chance to make an impression, with summer signing Sepp van den Berg being his central defensive partner, making his full debut for Liverpool.

With Ki-Jana Hoever representing the Netherlands Under-17 side, Neco Williams is in line to make his senior debut for the Reds, starting as the right-back. On the opposite flank, James Milner will come into the side in place of Andrew Robertson and will don the armband for Liverpool.

Set for another start. (Photo by Catherine Ivill/Getty Images)

Up ahead in midfield, Adam Lallana will reprise the holding midfield role, allowing Fabinho a rest. Alex Oxlade-Chamberlain and Naby Keita are certain starters alongside Lallana. Keita, Lallana and Oxlade-Chamberlain will be the senior figures that Lijnders had talked about during his presser.

The three-pronged attack, though, will have a healthy mixture of youth and experience. Divock Origi will get a rare start, lining up on the left flank. Rhian Brewster will lead the line for Liverpool, with the in-form Curtis Jones starting on the right wing, meaning Harvey Elliott will have to suffice with a place on the bench.