Hector Bellerin and Kieran Tierney will return while Mesut Ozil will be in contention to feature when Arsenal take on Liverpool in the Carabao Cup.

Arsenal will face a tricky test in their bid to reach the Carabao Cup quarter-finals when they lock horns with Liverpool at Anfield on Wednesday night. And, Unai Emery is expected to make wholesale changes to his side for the fourth round fixture.

The composition of the rotated side will be quite similar to the one that faced off against Vitoria SC in the UEFA Europa League last week. Emiliano Martinez will take his customary place in goal for the Carabao Cup, allowing first-choice goalkeeper Bernd Leno some rest.

Hector Bellerin and Gabriel Martinelli are set to start against Liverpool. (Photo by Glyn Kirk/AFP via Getty Images)

Hector Bellerin, Kieran Tierney, Rob Holding and Shkodran Mustafi are all expected to return as well. Bellerin and Tierney will be the two full-backs for the visitors, while Holding will partner Mustafi at the heart of the Arsenal defence.

Joe Willock had a horrible four-day span last week between the games against Sheffield United and Vitoria de Guimaraes. The young midfielder will have a chance at redemption on the trip to Liverpool, starting in the midfield double pivot alongside Lucas Torreira.

The big news, though, is the potential return of Mesut Ozil. The German playmaker has not taken the field for Arsenal since the 5-0 rout of Nottingham Forest in the previous round of the Carabao Cup. But, during his pre-match press conference, Emery talked about a possible return to action for Ozil. 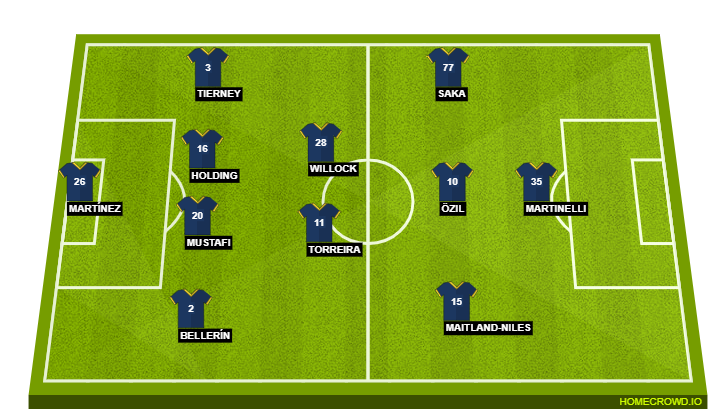 Ozil could also don the armband for Arsenal, something Emery was quizzed about as well. To that end, the Arsenal boss said, “It depends because he’s one of the captains. I’m not thinking exactly yet, but we are going to decide the first XI and if he’s in the first XI. It depends on who else plays. He could be, yes.”

Ozil will reprise the no. 10 role, from where his experience will hold the key to guide youngsters like Gabriel Martinelli, Ainsley Maitland-Niles and Bukayo Saka. Maitland-Niles and Saka will be the two wide men, with Martinelli leading the line for Arsenal against Liverpool.