Mason Greenwood and Axel Tuanzebe will make their first starts of the season when Manchester United welcome Astana to Old Trafford in the UEFA Europa League.

Manchester United hope to begin their UEFA Europa League campaign on a high when they play hosts to Astana at Old Trafford on Thursday. And, Ole Gunnar Solskjaer is expected to ring in the changes for his side’s first European game of the season.

The shuffles are set to begin right at the back, with Sergio Romero confirmed as a starter against Astana by the Manchester United boss during his pre-match press conference. Romero’s first start of the season means David de Gea is likely to be rested and omitted from Thursday’s matchday squad.

“Sergio will play tomorrow. Of course, tomorrow is a chance for me to give some much-needed game time because David has been very robust. To give him [Sergio] the chance is great and he’s always been reliable.”

“Fred came on and did well at the weekend,” Ole says. “He’s been patient and he’s been working hard. Hopefully tomorrow he can kickstart his season and we’ll see more and more of him.” #MUFC #UEL pic.twitter.com/AsNjyQvoha

The defensive line should see plenty of changes as well, with the fit-again Diogo Dalot likely to start on the right side of the Manchester United defence. Another confirmed starter against Astana is Axel Tuanzebe.

“He’s [Axel] going to start. Axel is one of them who just didn’t make the starting XI but he played well. Now it’s a chance for some of of them and we’ll have a game every four or five days now, so we’ll see some more use of the squad now. And we’ll see a few young ones tomorrow.”

Tuanzebe should have Phil Jones as his central defensive partner, meaning Victor Lindelof, fresh off signing a contract renewal with Manchester United, and Harry Maguire get a rest. Ashley Young should complete the backline and don the armband for the hosts.

Up ahead in midfield, Fred is likely to get his first start of the season after appearing off the bench against Leicester City. And, judging by Solskjaer’s comments during his presser, it seems as if Fred will partner Scott McTominay in the midfield double pivot. 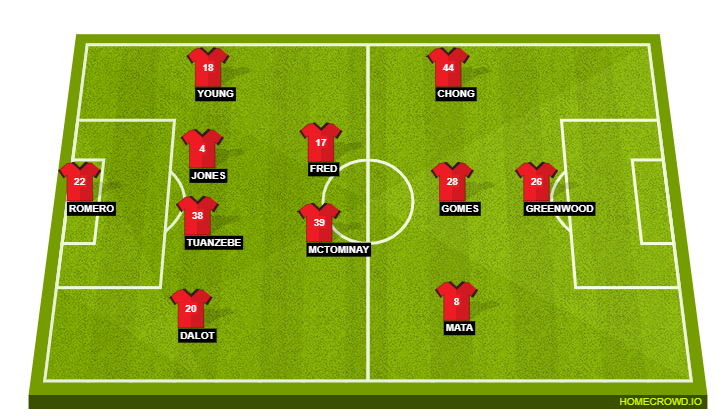 Angel Gomes and Tahith Chong have been on the fringes of the first-team and should make it to the starting lineup against Astana, with Gomes reprising the no. 10 role. Juan Mata might be the senior figure in attack, guiding the youngsters in the final third.

Finally, there is one more player who has been confirmed as a starter by Solskjaer – Mason Greenwood. The Manchester United boss said, “Mason will play, definitely. It’ll be his first start since Cardiff and he also needs game time.”

Greenwood should lead the line for Manchester United against Astana, meaning senior stars like Jesse Lingard and Marcus Rashford will be emergency options on the bench, if the youngsters cannot get the job done.