Unai Emery is likely to rotate his squad a bit, with one eye on Arsenal’s UEFA Europa League semi-final second leg against Valencia next week.

Arsenal will be hoping to get back to winning ways in the league following three consecutive defeats to Crystal Palace, Wolves, and Leicester City when they face Brighton & Hove Albion at the Emirates. The last loss left them in a precarious position in terms of the top four race, as now their only hope is to win and wait for their rivals to slip up.

There could be some changes to the side that won 3-1 against Valencia in the UEFA Europa League. Those changes could be reflected primarily in defence, with Laurent Koscielny set to be rested. The Arsenal captain hobbled off ten minutes before time against Valencia and Emery will hope to have him available for the second leg by resting him versus Brighton.

Nacho Monreal, who came back against Valencia for the final ten minutes, has shaken off a minor problem that saw him miss the Leicester game and could be available to start in Koscielny’s place. Emery is likely to retain his three-man central defensive unit, with Shkodran Mustafi and Sokratis Papastathopoulos the other two players in the back-three.

Behind the three-man defence, Bernd Leno is expected to be back between the sticks and replace Petr Cech, despite the veteran’s fantastic performance against Valencia. Emery though, was quizzed about the prospect of handing Cech a start in what would be his final Premier League appearance at the Emirates.

But, the Arsenal boss chose to remain coy on the questions surrounding Cech during his pre-match press conference, simply saying, “We are going to decide tomorrow. But our first objective is to win.” 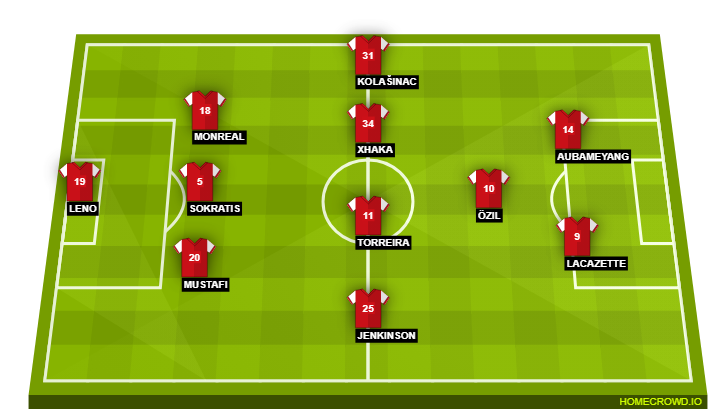 Meanwhile, Ainsley Maitland-Niles is suspended after being shown the red card against the Foxes last week, meaning he will not be available to face Brighton. Carl Jenkinson is thus, expected to make only his second Premier League start of the season and replace Maitland-Niles at right wing-back., while Sead Kolasinac will take his customary left wing-back position on the opposite flank.

In midfield, Lucas Torreira could return to the starting lineup as Granit Xhaka’s partner and replace Matteo Guendouzi, who started against Valencia. Apart from those changes, Emery is expected to retain other personnel and maintain the same attacking trident.

Mesut Ozil will keep his place behind the strikers in the Arsenal attacking three, although Emery has options in Henrikh Mkhitaryan and Alex Iwobi. Ozil will nevertheless start with Golden Boot chasing Pierre-Emerick Aubameyang and newly crowned Arsenal Player of the Year Alexandre Lacazette playing ahead of the German.