Nemanja Matic and Romelu Lukaku should return to the starting lineup when Manchester United take on Everton at Goodison Park on Sunday.

Manchester United will be aiming to return to winning ways, and the top four, when they face off against Everton at Goodison Park on Sunday. And, Ole Gunnar Solskjaer is buoyed by the fact that he has a near-full strength squad at his disposal heading into the weekend.

The latest players to become fully fit to start are Nemanja Matic and Alexis Sanchez, with the latter even making a cameo appearance in the 3-0 loss at Barcelona earlier this week. In addition to the duo, Ander Herrera has returned to training and is in contention to make the matchday squad.

Speaking to MUTV on Friday, the Manchester United boss expressed his delight at having as many as 20 outfield players at his disposal, “We’ll have 20 [players] training this morning [Friday], plus the keepers, which is not bad.”

“Nemanja and Alexis had a good session yesterday [Thursday] as well, so they will probably be involved. Ander is back in training – he’s been working really hard. Eric will be back in training over the weekend, Antonio we’re not sure about yet.”

David de Gea is a certain starter in goal for Manchester United, and the Spaniard will look to make amends against Everton after his howler on Tuesday. The changes are set to come into effect in front of him, with Victor Lindelof moving into the central defensive partnership after surprisingly being deployed as a right-back at Barcelona.

With Chris Smalling expected to be his partner at the heart of the Manchester United defence, Phil Jones will drop down to the bench, with Diogo Dalot starting as the right-back. On the opposite flank, Solskjaer ideally has very little option but to persist with Ashley Young once again, with Luke Shaw serving the last of his two-match ban.

However, the squad revealed by Manchester Evening News suggests that Young hasn’t travelled with the squad that will face Everton, meaning it is likely that he will be replaced by Matteo Darmian, who is the only viable option in the group. 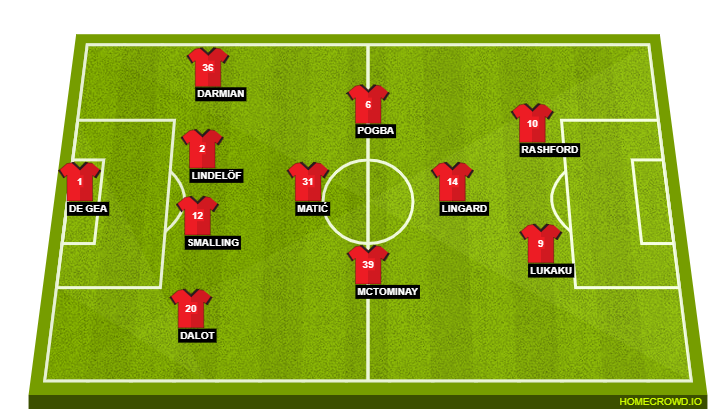 Up ahead in midfield, Herrera is only likely to make the bench at best, but Matic should return to the starting lineup, replacing Fred, who was a tad bit underwhelming in the Champions League tie. Scott McTominay and Paul Pogba though, should hold on to their spots.

Jesse Lingard should be deployed at the tip of the midfield diamond, with Juan Mata being his alternative. And, while Sanchez is in contention to start, he should get another cameo appearance. The final two spots in the side will be a toss-up between Marcus Rashford, Anthony Martial and Romelu Lukaku.

None of the three players have been completely convincing of late. But, Martial has been especially unimpressive, meaning Lukaku and Rashford should form the strike partnership for Manchester United, with Martial being an option on the bench.