Ousmane Dembele will miss out for Barcelona when they lock horns with Real Betis at Estadio Benito Villamarin on Sunday night.

Barcelona will be hoping to remain firmly in control of the La Liga title race when they pay a visit to the Benito Villamarin Stadium to take on Real Betis on Sunday night. But, Ernesto Valverde has one major casualty from the most recent encounter that his side featured in.

The Barcelona boss though, chose to focus on the importance of not taking Real Betis lightly during his pre-match press conference, pointing towards the fact that Los Verdiblancos are the only side to have beaten his side at Camp Nou this season.

“Tomorrow’s game is vital. It’s a tough road test. It’s important to look at what happened the last time we played them. They’re the only team to have beaten us at Camp Nou.”

There is some good news, however, with Thomas Vermaelen passed fit to return by the Barcelona medical staff. But, the Belgian centre-back has not made the travelling squad to take on Real Betis, with Valverde having his regulars at his disposal, meaning he misses out alongside fellow defenders Jean-Clair Todibo and Jeison Murillo.

The aforementioned regulars are Gerard Pique, Samuel Umtiti and Clement Lenglet. While Pique features whenever he is fit, the other spot at the heart of the Barcelona defence tends to be a toss-up between Umtiti and Lenglet these days, which should continue, meaning Umtiti starts on Sunday.

There should be one more change in the back four, with Nelson Semedo replacing Sergi Roberto, while Jordi Alba should complete the defensive line that will provide cover to first-choice custodian Marc-Andre ter Stegen.

In midfield, Ivan Rakitic and Sergio Busquets pick themselves in just about every game at this stage of the season despite the possible need of a rest. The third spot should be taken up by Arturo Vidal, with Valverde continuing to manage Arthur’s game time smartly, especially seeing the recurrence of Ousmane Dembele’s hamstring injury. 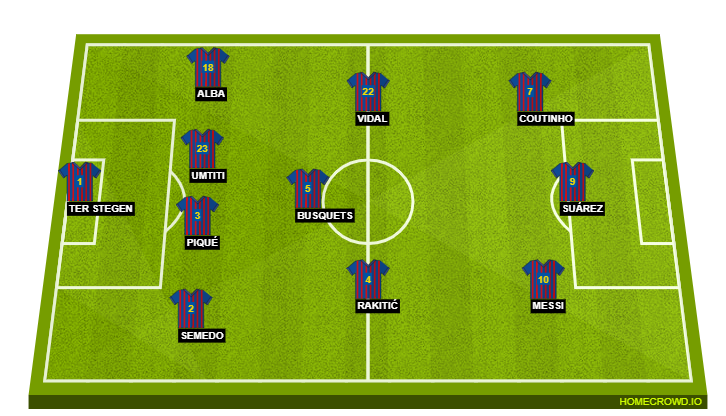 Dembele has been ruled out for up to four weeks after sustaining yet another injury, and the Barcelona boss shouldered the blame (h/t Goal) for risking the Frenchman unnecessarily in his side’s 5-1 win over Lyon earlier this week.

“He’s injured, it was a decisive game and, although he had a niggle, we thought it was important to play him. He played and had a little problem. We hope he’s back in three weeks. We took a risk and now we’ve lost him for three or four weeks. I felt it was a good idea to put him on. Had the scoreline been different I may have made a different decision. You never know what’s going to happen.”

With Dembele ruled out to face Betis on Sunday, Philippe Coutinho should line up on the left side of the Barcelona attack once again, with Lionel Messi and Luis Suarez taking up the remaining two positions, as always.