Santiago Solari is without five first-team players as Real Madrid prepare to welcome Real Valladolid to the Santiago Bernabeu on Saturday evening.

Real Madrid will be looking to kick-start their march up the La Liga table, when they play hosts to high flying Real Valladolid at the Bernabeu on Saturday. This will be the first time that Santiago Solari will take charge of the first-team in a league game, and the interim boss exuded excitement when quizzed about his feelings during his pre-match press conference.

“You feel a special something when you come to the Bernabéu as a fan. I get excited when I go to games. As a player, it was indescribable as well. As I coach, well, I’ll see tomorrow, but I don’t imagine it’ll be too different to how I feel as a fan.”

But, Solari’s job is one full of obstacles, with the Argentine having to tackle an injury crisis in his squad’s defensive department. As many as four first-team defenders are unavailable for the visit of Real Valladolid, meaning the Real Madrid caretaker manager is down to his bare bones at the back.

Marcelo has sustained a hamstring strain that will keep him out for a couple of weeks, while Raphael Varane will not be available for the rest of the month due to a groin injury. Dani Carvajal has stepped up recovery from his calf problem, but the game on Saturday has come too soon for him. Jesus Vallejo is the fourth defender on the treatment table.

With several first-choice defenders unavailable, the back four pretty much picks itself. Nacho and Sergio Ramos should start at the heart of the Real Madrid defence, while Alvaro Odriozola and Sergio Reguilon are likely to man the wide areas.

Meanwhile, the choice of the goalkeeper should once again become a bone of contention with Solari in charge. Thibaut Courtois had become the preferred custodian in La Liga under Julen Lopetegui, but the Real Madrid interim boss could continue with Keylor Navas, banking on his experience to pave the way for some solidity at the back.

In midfield, Solari has all of his options available, and should recall the superstars for this one, having rested Luka Modric, Toni Kroos and Casemiro for the game against UD Melilla. Meanwhile, the manager also spoke about Gareth Bale, who is likely to return to the starting lineup following the rest for the cup tie.

“We hope he can show his remarkable qualities in every game. He’s a fantastic player and we want to enjoy him every day.” 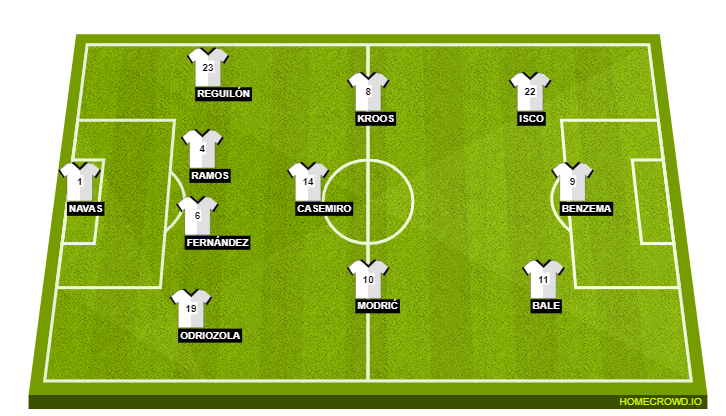 Alongside Bale, Karim Benzema is an automatic selection as well. But, the final spot is another which will put Solari in a predicament. Marco Asensio was decent against Melilla, while Isco will be raring to go as well. Vinicius Jr. is another player at the disposal of the Real Madrid interim coach.

But, the Brazilian might have to suffice with a place on the bench, with Isco likely to get the nod from Solari to face Real Valladolid. Asensio and Vinicius though, will likely come to the party in the second half as impact substitutes, if needed, considering Mariano Diaz is unavailable for Real Madrid.