Ernesto Valverde has been jolted by the unavailability of Samuel Umtiti, as Barcelona get set to host Athletic Bilbao at Camp Nou on Saturday.

Barcelona will be aiming to get back to winning ways when they welcome Athletic Bilbao to Camp Nou on Saturday evening. And, Ernesto Valverde has receive a huge setback for the foreseeable future, with Samuel Umtiti suffering a torn knee ligament.

Initial reports had suggested a lengthy layoff for the Frenchman, but the Barcelona boss has downplayed the fears without putting an exact time stamp for a return date.

“He’s got a knee problem so he couldn’t have played on Wednesday. Let’s see how things develop, but hopefully it won’t be too long before he’s back with us. It’s a blow for us.”

It surely will be a huge blow if Umtiti is on the sidelines for several months. For now though, his absence is offset by the return of Clement Lenglet, who is available once again after serving a one-match ban. His full debut may not have gone as planned last weekend, but the Frenchman will have the chance to make amends against Bilbao.

Lenglet should be joined by Gerard Pique in the starting lineup, with the veteran Barcelona defender now having even more responsibility on his shoulders. The back four will likely be completed by Sergi Roberto and Jordi Alba, with Valverde likely to name his strongest possible lineup.

Meanwhile, the Barcelona boss also took the opportunity to heap praise on his squad during his pre-match press conference, iterating that he is impressed by his player’s attitude following the loss to Leganes.

“My team have always had an extraordinary attitude. Whenever we have conceded a goal, we’ve reacted. It’s true that we have to improve, even when we win games.” 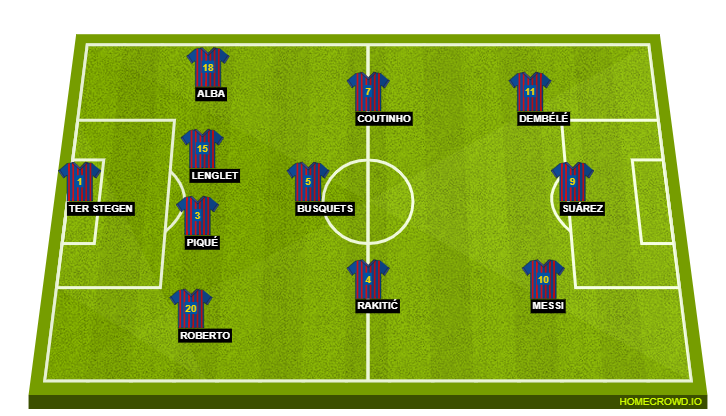 In midfield, Sergio Busquets is an automatic starter, and the experienced star will be one of several players hoping to put the disappointment of the midweek league clash behind them when Bilbao come visiting, especially after signing a new deal with Barcelona.

Arturo Vidal, Arthur, Ivan Rakitic and Philippe Coutinho are the options for the other two spots in the middle of the park. But, the summer signings will have to make do with a place on the bench, meaning Rakitic and Coutinho will complete the midfield trio.

Upfront, Lionel Messi will lead Barcelona once again, with Luis Suarez giving him company in the final third after being named on the bench against Leganes. And, Ousmane Dembele picks himself, considering Malcom has been surprisingly excluded from the matchday squad.