Jurgen Klopp will be without just two first-team players when Liverpool play hosts to Brighton and Hove Albion at Anfield on Saturday.

Liverpool will be aiming to continue their perfect start to the 2018-19 Premier League season when they welcome Brighton and Hove Albion to Anfield on Saturday evening. And, Jurgen Klopp would be elated by the state of his squad, with just two first-team players remaining on the treatment table.

One of these players is a long-term absentee, with Alex Oxlade-Chamberlain set to miss the entire season due to a knee injury. The other though, should be available soon, with Dejan Lovren undergoing light training sessions as he recovers from an abdominal issue.

When enquired about the assessment of the World Cup finalist during his pre-match press conference, Klopp said that he is expecting Lovren to be fit and available after the international break.

“Dejan is coming closer but he is not really around team training in the moment. I’m not 100 per cent sure what he is doing today because we are the day before the game, so he will not be involved in that game. I’m pretty sure no chance for the Leicester game and then hopefully after the international break he will be ready to go. That would be nice.” 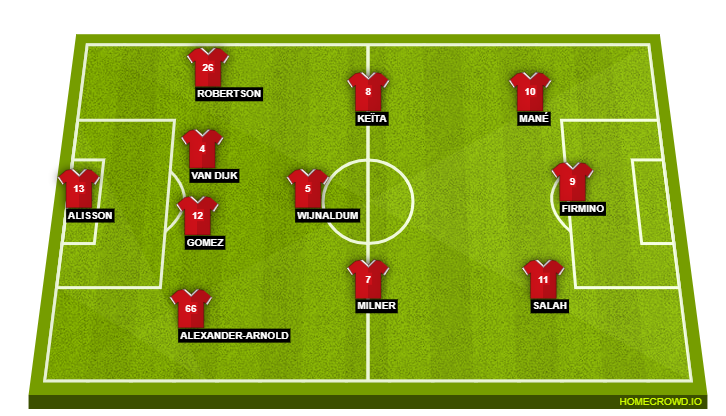 For now though, Lovren’s loss has been ably mitigated by Joe Gomez, who has been impressive at the heart of the Liverpool defence alongside Virgil van Dijk. Flanking the duo, will be Andrew Robertson and Trent Alexander-Arnold, with Alisson starting behind the back-four once again.

Meanwhile, Klopp was also quizzed at the prospect of persisting with the same starting lineup for the third successive game. But, the Liverpool boss remained coy on those questions while just stating that continuing with the same side remains a possibility.

“We will see. That must always be an option and we’ve had enough sessions. I don’t think it makes sense to only stick to a team because we won, [although] that’s the most important thing. We have quality in the squad and there can be different reasons to change the line-up, so that’s possible of course.”

As far as the game against Brighton is concerned, Klopp should name an unchanged side, meaning Naby Keita, Georginio Wijnaldum and James Milner should continue in midfield. Upfront, there are no reasons to call for changes to a formidable attacking trio.

There have been some rumours that Roberto Firmino could be relegated to the bench in favour of Daniel Sturridge. But, the Brazilian is a key part of Klopp’s system at Liverpool, and should continue in the false nine role, with Sadio Mane and Mohamed Salah for company.