Zinedine Zidane is likely to ring in the changes as Real Madrid get set to host Leganes at Santiago Bernabeu on Saturday.

Real Madrid return to La Liga action following a successful midweek European outing, when they welcome Leganes to the Bernabeu on Saturday. With the crucial semi-final second leg against Bayern Munich just three days away though, Zinedine Zidane might ring in the changes to keep most of his first-choice players fresh.

However, Keylor Navas is likely to start between the sticks, with the changes expected to happen in front of him. One of these will be forced, however, as Dani Carvajal picked up a knock in the first leg against Bayern on Wednesday, and is unavailable this weekend.

With Nacho still on the road to recovery from a thigh injury, young Achraf Hakimi should get a rare start on the right side of the Real Madrid defence. Meanwhile, Zidane commented on Nacho’s injury situation in his pre-match press conference, iterating that the Spaniard is making good progress on his return.

“He’s not relapsed at all. His progression is normal and what he’s doing, he’s doing well. He’s not been in the team in a month, but every day he’s much better. We don’t want to risk anything. The most important thing is to recover, return to the group and to train normally. That is the most important thing, to get back up to speed with the team.” 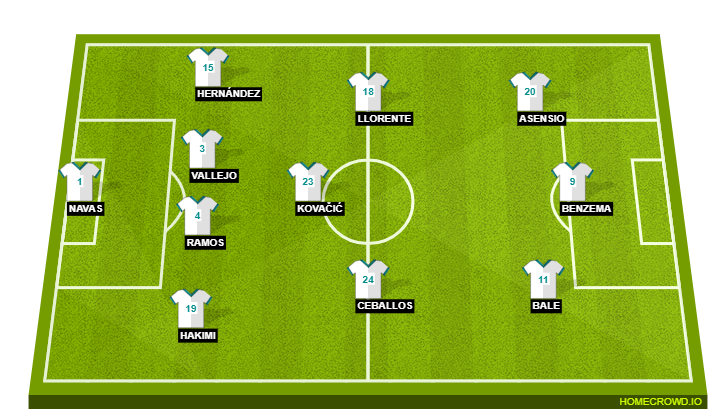 Nacho was also an option at the heart of the Real Madrid defence, and his absence should see Jesus Vallejo get another opportunity, with the youngster starting alongside captain Sergio Ramos. At left-back, Marcelo is likely to be rested as well, which should pave the way for Theo Hernandez.

Up ahead in midfield, Zidane could rest his trusted trident of Casemiro, Luka Modric and Toni Kroos, which should see the likes of Dani Ceballos, Mateo Kovacic and Marcos Llorente returning to the starting lineup. The big miss in midfield will be Isco, who also picked up an injury in the midweek win.

Upfront, Cristiano Ronaldo is another player likely to be rested, while Marco Asensio should be rewarded for his game changing performance on Wednesday with a start against Leganes. Completing the front trio, should be Karim Benzema and Gareth Bale, who are both fighting for their futures at Real Madrid.

Zidane went on to address the speculation surrounding two-thirds of the famed BBC trio, claiming that each player, including Bale and Benzema is important in the run-in, and neither of them is affected by the rumours surrounding their futures.

“We need them and I’ll do everything possible so that they know that they’re important and that they’re not affected by whats said on the outside.”