Arsene Wenger will be without five players when Arsenal travel to the VEB Arena to face CSKA Moscow in the quarter-final second leg on Thursday.

Arsenal will be looking to clinch a place in the UEFA Europa League semi-finals when they face off against CSKA Moscow at the VEB Arena on Thursday. But, Arsene Wenger is grappling with a few pressing injury concerns with a couple of key players missing the trip to the Russian capital.

The problems start right at the back, with David Ospina on the treatment table due to an ankle injury. In his absence, Petr Cech should continue in goal once again, behind the regulation back-four featuring Hector Bellerin, Shkodran Mustafi, Laurent Koscielny and Nacho Monreal. But, ahead of the defence is where the real problem starts.

🚨 Update on our squad for #CSKAvAFC

Granit Xhaka has not made the trip to Moscow as he is suffering from the flu. Arsene Wenger confirmed the same in his pre-match press conference, while also adding that Arsenal should overlook Xhaka’s absence and concentrate on the job at hand.

“Xhaka is not here with flu and I think for us it is vital we focus on the performance tomorrow.We have an advantage, the best way to build on the advantage is to try to win the game, we play with our best possible team, have a positive attitude and try and win the game.”

The Swiss international’s void is likely to be filled by Mohamed Elneny, who should provide the cover to the back-four, and allow those in front of him the freedom to attack. Partnering Elneny in midfield should be Jack Wilshere and Aaron Ramsey, both of whom didn’t start against Southampton last weekend. 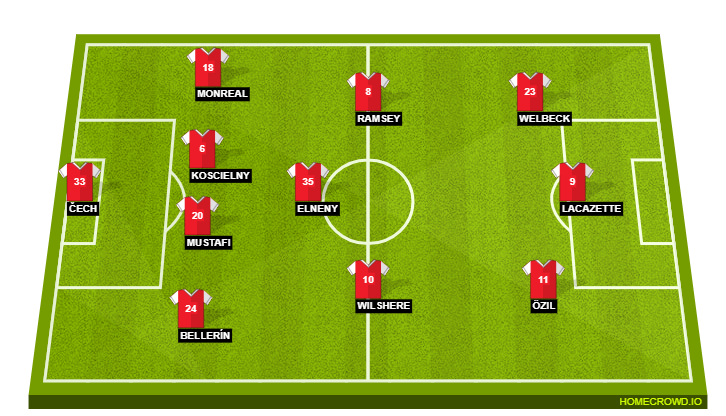 The duo are expected to provide the creative impetus in midfield alongside Mesut Ozil, who should start despite fears of fatigue heading into the second leg. But, there are two crucial absentees in attack.

Henrikh Mkhitaryan is struggling with a knee injury that will also keep him out of the semi-finals, should Arsenal qualify on Thursday. In the Armenian’s stead, Danny Welbeck should line up alongside Mesut Ozil, buoyed by his match-winning brace against Southampton.

Upfront, Pierre-Emerick Aubameyang will miss out yet again due to his ineligibility to play for Arsenal in the Europa League. But, in Alexandre Lacazette, Arsenal have an able deputy, who is riding high on confidence after scoring a brace in the first leg last week.