Zinedine Zidane does not have any fresh injury concerns as Real Madrid get set to welcome Atletico Madrid to the Bernabeu for El Derbi on Sunday.

Real Madrid and Atletico Madrid meet each other in one of the most eagerly anticipated El Derbi in recent times, with a win crucial for either side in their bid to finish second in La Liga. Zinedine Zidane does not have any major pressing concern hampering his preparation for the game either, with just one player on the sidelines.

Nacho is the only player on the treatment table, recovering from a thigh injury that should keep him out of action for a couple more weeks. In his absence, the Real Madrid boss has Jesus Vallejo as a backup option, but he hasn’t been included in the matchday squad.

Raphael Varane, who has only just managed to shrug off a knock, should, thus, line up alongside Sergio Ramos at the heart of defence, with the Real Madrid captain a certain starter on Sunday, considering he is suspended for the second leg against the Bianconeri. Dani Carvajal and Theo Hernandez should be the full-backs, with Marcelo likely to be rested. 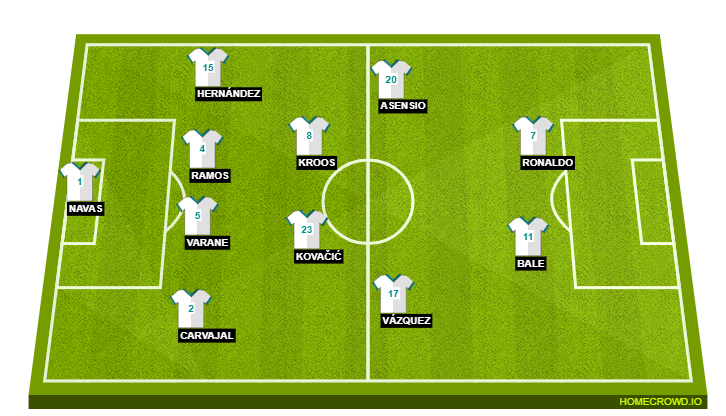 Meanwhile, Zidane could shuffle his system up a bit to create more stability in midfield. Additionally, Casemiro and Luka Modric could be rested, with the resurgent Mateo Kovacic likely to line up alongside Toni Kroos in the middle of the park.

Marco Asensio and Lucas Vazquez should man the wide areas, with the duo proving to be impressive in recent weeks, especially when deployed on either side of a four-man midfield. Upfront, Karim Benzema is likely to be rested, with Gareth Bale getting a rare place in the starting lineup, starting alongside Cristiano Ronaldo.

The Welshman’s future is constantly the subject of widespread speculation, with Zidane not naming him in the starting lineup week in week out in recent weeks. But, the Real Madrid boss reaffirmed in his pre-match press conference that Bale remains an important player for him, and will be key going forward.

“They’re all important for me and he’ll be an important player until the end of the season. I believe that he’ll bring a great deal to the team at particular times, but I’ve got to make the decisions. All of them always want to play, and all the more so in the case of a player like him.”

“We know what he’s capable of and what he has done in the past. I don’t believe that it’s true that he only features in the less important games. We have many matches, he’s a Real Madrid player and is here to stay. That’s the impression I get, but we’ll have to see what happens.”